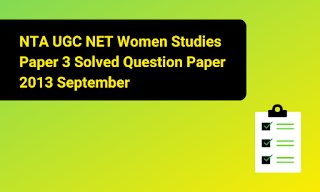 You can boost your preparation by referring to NTA UGC NET Women Studies Paper 3 Question Paper 2013 September. It will give you information about the important chapters and concepts covered in all chapters.

1. Which of the following is NOT a characteristic of Feminist Theory?

(A) Feminist Theory treats women as the central subject of investigation.

(B) Feminist Theory promotes activism on behalf of women.

(D) Feminist Theory advocates a linear understanding of the historical experiences of women.

2. What is central in the different approaches of feminism?

i. Women and their existential situation as central to social progress.

ii. In all historically recorded societies, men appear to have absolute power over women.

iii. Existential state of women can be changed.

iv. Women will never be released from the clutches of age-old slavery.

3. Which of the following acknowledges that women experience oppression in a variety of ways according to class, race, ethnicity, region and sexual preference?

4. ________ feminists seek to expand the rights of women through legislation.

(A) Positive masculine and feminine

6. ‘Nature’ as the ‘Feminine Principle’ – is reflection of ideas from which feminism?

7. Mark the correct answer about Women’s Studies from the following:

i. It is narratives of women by women.

ii. It is a Social Science.

iii. It is collection of Studies on Women issues.

iv. It is an academic discipline.

8. When a researcher assumes a role in the group under study and maintains a low profile as observer is known as

9. What among the following does make the first Women’s Studies Centre in India an unique one?

i. Direct concern of UGC for the establishment of the Centre.

ii. It was started in a Women’s University.

iii It was initiated by the University itself.

iv UGC saw the centre as an adjunct to Women’s Education.

10. Write the descending sequence of the Feminist Movement in the world relating to the Adult Franchise.

12. Which one of the following is not a bar diagram?

14. Which State has the lowest child sex ratio?

15. Which of the following statements regarding the Parliamentary Committee on Women are correct?

i. The members of the Committee are nominated by the Minister for Women and Child Development.

ii. The Minister for Women and Child Development is the exofficio member of the Committee.

iii. The Committee has members from both the Houses of Parliament.

iv. The Chairperson of the Committee is appointed by the Speaker.

17. Write the sequence of the following Acts in descending order:

i. The Pre-conception and Pre-Natal Diagnostic Techniques Act.

19. Identify the reasons for the existence of wage gap between males and females:

iv. Women’s market skills decline when they remain out of labour force.

(D) iii and iv are correct.

i. Declaration on the Elimination of Violence against Women.

ii. Convention on the Political Rights of Women.

iii. Declaration on the Protection of Women and Children in Emergency Armed Conflict.

22. The purpose of providing education to women is to

i. Enhance their self-image.

iii. Enable them to think critically and participate in decision-making.

iv. Enable them to play their traditional role effectively.

23. Which one of the following is a disadvantage of Cluster sampling?

(A) Variation of cluster size may increase the bias

(B) It can cover large population and large areas.

(C) Cost of this method is much less.

(D) It does not take more time.

24. Write the reasons for deficit of female births.

i. Deficit of female births, deaths from excess female mortality due to son preference.

iv. HIV/AIDS risks have compounded the deaths of women.

25. Who was the Founder of Social Welfare Board in India?

26. Who advocate the concept of ‘Comparable-worth discrimination’ in relation to women’s work?

(A) Treiman and Hartmann

(B) Kraut and Luna

27. What is the correct expansion of ICRW?

(A) International Committee on Research of Women

(B) International Centre for the Research on Women

28. The life expectancy at birth for females in low-income countries rose from

29. “Women now represent 40% of the global labour force, 43% of the world agricultural labour force and more than ½ of the World’s University Students’, stated by which report?

30. Punishment for gang rape under Section 376 D of IPC is

(B) Rigorous imprisonment for a term not less than 20 years

(C) Rigorous imprisonment for a term not less than 20 years but which may extend to life, meaning the remainder of that person’s natural life.

31. The institutional manifestations of patriarchy can be seen in

iv. Government and its various areas of control

(A) ii and iii are correct.

(B) iii and iv are correct.

32. Which Article of the Constitution makes the Right to Education a Fundamental Right?

33. Identify the reason for feminization of employment in global agriculture from the following:

(A) A change from traditional crops to sericulture.

(B) A change from traditional crops to horticulture, floriculture, protein-rich meats and processed foods.

(C) A change in food markets.

(D) A change from traditional crops to sericulture and multiculture.

i. SAARC convention on Preventing and Combating Trafficking in Women and Children for prostitution.

ii. Convention on the Nationality of Married Women.

iii. United Nations Convention on the Protection of the Rights of All Migrant Workers and Members of their Families.

36. Random sample technique is more applicable if the target population is

(C) Both Homogeneous and Heterogeneous

(D) Heterogeneous across set and age only

37. The most essential step in making interview, a successful method of data collection is

(B) Arranging secondary information on the topic of research

(C) Establishing rapport with the respondents.

39. Assertion (A): Entrepreneurship among women in small scale sector is gradually increasing.

Reason (R): There is positive and favourable environment in the society for promoting entrepreneurship among women.

40. The National Commission for Women has initiated ‘Mahila Adhikar Abhiyan’. Identify the incorrect answer about the Abhiyan:

i. It seeks to empower Dalit and Tribal Women only.

ii. It seeks to empower with information about their entitlements.

iii. The campaign aims to empower women of rural and remote areas of the country about various government schemes.

(A) Revolution, Reformation and Transformation

(B) Transformation, Reformation and Revolution

43. The demand for skilled workers in which sector will be more by 2015?

44. Which factor is responsible for low status of women in India?

(A) Changes in the family system

45. Assertion (A): Entrepreneurship Development Training Programmes are encouraging women to start their own enterprises.

46. Percentage of Main Female Workers to Total Workers (2011) is

(B) Prevention of Domestic violence

50. Vulnerable women can protect themselves from their HIV/AIDS infected husbands by adopting which one of the following?

(B) Injection Drug Use

52. Percentage of rural female marginal workers of total workers in India (2011) is

53. What is the development agenda of the Panches and Sarpanches to bring change in India?

54. Mark the correct answer about the personal laws that govern women:

i. The Hindu Succession Act

55. Which State has the highest percentage of Women MPs?

56. “Equal access to education for women and girls will be ensured” – this was stated in the

57. National Adult Education Programme is based on

59. First Indian Women to win a medal in an Olympic event:

60. Assertion (A): Female literacy is improved at all levels of education.

Reason (R): There is still a high rate of SC/ST female drop outs in school education.

61. Assertion (A): Sex discrimination creates a pay gap for women workers in the unorganised sector.

62. Assertion (A): Documentation of sex-disaggregated data is essential for women’s development.

Reason (R): Collection and presentation of sex disaggregated data is not necessary to prepare suitable policies for women.

63. Assertion (A): In many of the advertisements women’s body, smile, curves are used only as commodities to sell other commodities.

Reason (R): No doubt a bare female body attracts but it is by no means creative advertising.

64. Assertion (A): The phenomenon of prostitution is largely concentrated in large cities.

Reason (R): Women enter prostitution to get relief from economic distress, both individual and familial.

65. Assertion (A): Everyday thousands of women and teenaged girls in India become victims of trafficking.

Reason (R): Rural women and girls are under the grip of large scale unemployment, poverty and dowry demand.

67. Assertion (A): One of the reasons for honour killing is inter-caste and inter-religious marriage.

Reason (R): Women and men willing to marry beyond own caste and religion are to be discouraged.

(A) Economic, social and political status

(B) Caste, class and gender status

69. Which of the following is an agency of socialization?

70. Which Report highlights the persistent gap between women’s expanding capabilities and limited opportunities?

(A) Concept and Measurement of Human Development, 1990

(B) Global Dimension of Human Development, 1992

71. The members of the Justice J.S. Verma Committee constituted by the Government of India were

Read the passage and answer the following questions (Questions 72 to 75):

The politics of language has played an important role in promoting and strengthening the subordination of women, especially in highly stratified societies. In India, the virtual invisibility of women in Social Science literature, agricultural Sciences/Economics as well as national planning and the educational process could certainly be traced to the gradual disappearance (from non-use?) of a feminine form in the word for peasants in different Indian languages – when such forms continued for all the traditional artisanal or service sector occupations (barber, weaver etc.) The loss of this vocabulary is symptomatic of the processes unleashed in colonial India. It is well-known that agricultural surplus was the primary source of ‘revenue’ earning in colonial India. The marginalisation of women in the “official” records of the Department of Revenue and Agriculture highlights the “erasure” of women from the most visible domain of economic activity and the patriarchal bias that went into the casting of the Indian peasant as male. Contradictorily, the Indian Census recorded decade after decade that the largest numbers of women workers were in agriculture, sometimes outnumbering men in the category of landless agricultural labourers. Terms like gender-gap/ disparities, gender-mainstreaming reflect a lack of understanding that subordination of women has been an advancing process historically: a dynamic that is by no means over for all. To suggest that all that is required is for women to catch up with men is to ignore or underplay the transformative role of the ideology and agenda of the “Gender Revolution” of the twentieth century. In other regions, such criticisms came from women’s organisations, occasionally from under resourced and ill-equipped State agencies (for example Commissions) – who complained of their status as unwanted children by the mainstream of governance.

72. The marginalization of women in the ‘official’ records of the Department of Revenue and Agriculture is due to

(A) Patriarchal bias in the existing vocabulary.

73. Invisibility of women in national planning is due to

(B) Women are landless labourers.

(C) Women only do the supportive work for men.

(D) The lack of feminine vocabulary for women’s occupations.

74. “The subordination of women has been an advancing process historically” cannot be understood by the terms like

75. Assertion (A): The politics of language has promoted and strengthened the subordination of women in stratified societies.

Reason (R): Large number of women workers have been in the category of landless agricultural labourers.

The old UGC NET Examinations paper-3 in Women Studies was of descriptive type till December 2011.