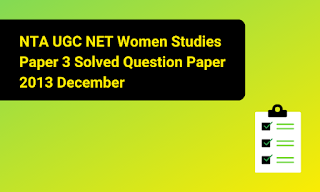 You can boost your preparation by referring to NTA UGC NET Women Studies Paper 3 Question Paper 2013 December. It will give you information about the important chapters and concepts covered in all chapters.

1. Which approach of feminism is based on the premise that both men and women are born and are gifted with the same rational faculties so the women should not be denied equality of opportunity in all those activities which are open to men?

2. ____ refers to an inclusive world-wide movement to end sexism and sexist oppression by empowering women.

3. Which approach is appropriate for adequate understanding the political orientation of feminism?

4. Which of the following is an incorrect statement about Liberal feminism?

(B) Women and men should have equal sexual rights

(C) Women and men should be given same educational opportunities

(D) Women and men should get equal civil and political rights

5. What is incorrect about unified system theory?

(A) Capitalism and patriarchy are one and the same.

(B) Gender division of labour is a unifying concept.

(C) Patriarchy and capitalism as forms of social relations are distinct from each other.

6. Which approach of feminism views that women’s oppression as women is caused not only by living in a class society, but also in classless societies?

7. What are the new challenges for women besides the persistent problems of women in the 21st century?

(i) Gender and Development

(iii) The Ascent of Market Ideology

11. Nancy Kleiber and Linda Light’s method of feminist research which combines the use of three elements of research i.e. research on women, by women and for women is termed as:

13. The book ‘Sexual Politics’ was written by whom?

14. First Woman President in the World:

15. Assertion (A): Sexual harassment at workplace is a personal problem of women.

16. Why was a sharp decline in Women Work Participation Rate (WWPR) during the Census of 1971? Choose the correct answer:

(A) The participation rate of women work was low.

(B) The definition of ‘women work’ was changed.

(C) The definition of ‘work’ was revised.

(D) Most of the women opt education rather than work during the period.

17. How many women were ‘missing’ in the world as per the World Development Report 2012?

18. Select the title of the World Development Report 2012 from the following:

(A) Engendering development through Gender equality, resources and voice.

(B) Equality and development.

19. The effective coverage of the Maternity Benefit Act (1961) was measured by the National Commission for Enterprises in the Unorganised Sector (NCEUS, 2009). Choose the correct one from the following:

20. Which of the following are not correct regarding the Parliamentary Committee on the Empowerment of Women?

(i) The Committee is chaired by the Prime Minister of India.

(ii) The Members are appointed by the President of India.

(iii) It has equal number of members from both the Houses of Parliament.

(iv) It has members in the ratio of 2:1 from Lok Sabha and Rajya Sabha.

21. Changes to the natural greenhouse effect are a result of which of the following man-made emissions of Green House Gases?

(B) Hydro and Perfluoro carbons

(i) World Conference on Education for All

23. Identify the programme which does not aim at the development of girl child:

24. What is not covered by the Domestic Violence Act?

(A) Women in live in relationships

25. Among the following States which have Infant Mortality Rate higher than ‘59’ according to 2010 SRS data in India?

26. Name the first woman who contested the election for the Office of the President of India.

27. In which of the Five Year Plan, education is treated as the ‘most critical investment on human development’?

28. Which of the pair is not correctly matched?

(B) “The Dialectic of Sex” –– Shulamith Firestone

(C) “The Origin of the Family, Private Property and State” –– Karl Marx

29. First Woman to win the title of International Grand Master of Chess:

30. Mark the correct statement about ‘Culture’:

(A) It is learnt and includes both material and non-material aspects.

(B) It primarily means good tastes in fashion and arts.

(C) It is a matter of norms and values only.

(D) It is essentially an attribute of the individual rather than that of the group.

31. Assertion (A): The women wage seekers have achieved gender equal wages and have got empowered socially and economically through NREGA scheme.

Reason (R): The NREGA employment served as a primary wage earning opportunity for a large section women in rural areas.

(A) Federation of Funding form Development

(B) Financing for Development

34. What is called Stalking? Choose the correct answers from the following:

(i) Any man who follows a woman and contacts, or attempts to contact such woman to foster personal interaction repeatedly despite a clear indication of disinterest by such woman.

(ii) A man monitors the use by a woman of the internet.

(iii) E-mail or any other form of electronic communication by a man to a woman.

(iv) A man showing external love before her friends.

35. Who has given a call to build a “Social order, the only one that allows for a radical solution to the women’s question”?

36. Assertion (A): Empowerment of women is possible through entrepreneurship development.

Reason (R): Entrepreneurship development is the only indicator for empowerment of women.

37. National Human Rights Commission was established in the year:

38. Malnutrition is measured by:

(B) Loss of grasping capacity

(D) Loss of hearing and eye-sight

39. Which one of the following is not a research based journal of Women’s Studies?

(B) Indian Journal of Gender Studies

(D) Journal of Women in Culture and Society

40. Assertion (A): Globalisation process has reduced the work – space in the market and kept away women from the production process.

Reason (R): Most of the women are illiterate and semi-skilled.

41. Assertion (A): Empowerment of women is closely associated withnwomen’s participation in unorganized sector.

Reason (R): Empowerment of women is related to enhancement of women’s capabilities and self confidence.

42. Assertion (A): Entrepreneurs are only born. They cannot be made.

43. National Institute of Micro, Small and Medium Enterprises is located in:

44. Who are the Founder Directors of the following UGC Women’s Studies Centres in India? Match the List-I with List-II:

50. Assertion (A): Secularization is an inevitable consequence of industrialization.

51. The State with the lowest female literacy rate is:

53. The World Values Survey provides a window on how social perceptions have changed during the globalization process? Choose the correct answer:

(i) Social attitudes toward women have changed from domestic roles to social actors or an agency to change.

(ii) The bargaining power of women has changed.

(iii) The collective action for the empowerment of women.

54. ICTs have transformed the economic activity of both women and men by increasing the demand for which skills?

55. The UNO nominated ‘Malala’ as UN Ambassador to promote

(A) Girls’ Safety and Security

56. Please identify the important sectors where women are working more than men in the world:

57. Unorganized sector is marked by:

58. Percentage of Urban female marginal workers to total workers in India (2011) is:

59. Gender Parity Index at Senior Secondary Level of Education (XI-XII) among the SCs (2012) is:

60. Percentage of rural female main workers to total workers in India (2011) is

61. Marginal workers are those workers who work for the major of the reference period which is

(A) Less than four months

(B) Less than six months

62. Assertion (A): The persistence of discriminatory laws, policies, patriarchal customs and traditions in various countries are still blocking women from enjoying their land and property rights.

Reason (R): Most of the women are enjoying property and land rights in India.

(A) Criminal Procedure Code only

(B) Indian Penal Code only

(D) All the above three (CrPC, IPC and Indian Evidence Act)

65. The Constitution (Amendment) Bill passed by Rajya Sabha that provides for reservation for women in Parliament and State Assemblies is:

69. The Chairperson of the Parliamentary Committee on the Empowerment of Women is:

71. Which one of the following is the UN agency for women?

Read the passage and answer the following questions: (Question Nos. 72-75)

The most celebrated theoretical proposition that links women’s labour force participation with economic development, the U-shaped feminisation hypothesis, argues that when subsistence economies transform to developing economies, women withdraw from the labour force and thereafter beyond a minimum threshold the participation rates of women start rising. The U-shaped curve takes this form owing to the substitution and income effects on women’s choice between domestic unpaid work and paid work. In subsistence economies women contribute labour towards subsistence agricultural production as unpaid family labour along with domestic activities, thus suffering from double burden of work. With the rise of commercialised agriculture, structural transformation, enhancement in household income and gender-based wage differentials, opportunity cost of domestic activities for women increases while that of paid labour of women decreases. Hence they tend to withdraw from the labour force, termed as the “income effect”. With the rise of service sector, white collar jobs, institutionalised-care giving, expansion of education among women and declining wage differentials, the opportunity cost of paid labour for women increases. Thereafter women “substitute” domestic activities for paid work. Yet this framework assumes away the fundamental gender relations that regulate women’s participation in paid work. Socialist feminist construct of the development of capitalism exploit gender relations to explain defeminisation. With the development of capitalist organisation of production in a patriarchal social system, female labour progressively undergoes “female marginalisation”. The shift from attached labour in the feudal agricultural system to wage labour in capitalist farming realigns the household division of labour among worker households with sectoral diversification and technological change the emerging skillbiased demand for labour is gender segregated due to gender-biased progress in education. Women are then obligated to either withdraw from the labour force or enter as secondary workers.

72. Assertion (A): When subsistence economies transform to developing economies, women withdraw from the labour force and thereafter beyond a minimum threshold, the participation rate of women starts rising.

73. What are the reasons for ‘female marginalization’ in paid work?

74. What leads the women to ‘substitute’ domestic activities for paid work?

(A) More jobs in service sector

(B) Incentives to the women for work

75. Which of the following variables lead to the increase in opportunity cost of domestic activities for women?

The old UGC NET Examination paper-3 in Women Studies was of descriptive type till December 2011.