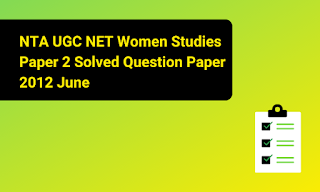 You can boost your preparation by referring to NTA UGC NET Women Studies Question Paper 2 2012 June. It will give you information about the important chapters and concepts covered in all chapters.

1. Which feminist thought suggest that gender equality can be realized by eliminating the cultural notion of gender?

2. Among the following women whose name is closely associated with Central Social Welfare Board?

(A) The biological inferiority of women

(B) The idealization of women in society

(C) Castration of women by aspects of patriarchy

(D) The motherhood of women

(i) Women and men will be paid equally for doing the same work.

(ii) There will be no discrimination against women at the time of recruitment.

(iii) The employer is bound to maintain a register of the workers.

(iv) There will be no discrimination against women workers in any condition of service like promotion, training or transfer.

5. Mark out the factor contributing to high maternal mortality rate

(C) Increase in the number of working women

6. Institutional initiatives for women’s issues in the post-independence period are

(i) Constitutional provisions and social legislations

7. Gender disaggregated data are the basis for

(A) Analysis of women’s work

8. The first Research Centre for women was established in 1974 by:

(A) Association of Scientific Health Activists

(B) Association of Social Health Activists

11. Which one of the following pair is not correctly matched?

(A) Objects and consumers

(B) Subjects and producers

13. Assertion (A): The percentages of women in the higher levels of political bodies are negligible.

14. Assertion (A): Education of girls and women in India have reinforced gender role specially motherhood.

Reason (R): In India, women’s education was neglected for many years.

15. Who among the following is not an Entrepreneur?

16. Masculinities and femininities are

(i) Gendered rather than non gendered

(ii) Socially constructed rather than naturally

(iii) Changing across time and space

(iv) Based on biological determinism

17. ‘Consciousness rising’ is the major agenda discussed by

19. Assertion (A): Violence against women is a universal problem that must be condemned.

20. Parivarik Mahila Lok Adalats Programme was launched in 1996 by

(A) The Commission for SC/ST

(B) The Human Rights Commission

(C) The National Commission for Women

21. Women’s studies find its relevance in the ways:

(i) To uncover the gender discrimination prevailing in the society.

(ii) To mobilize women’s attitude for betterment of their living.

(iv) To activate the women on social and economic issues.

22. Arrange the chronological sequence of the laws with the year of their enactment.

(i) The 73rd and 74th Constitutional Amendment Act

23. Assertion (A): Empowerment of women is closely associated with women’s participation in unorganized sector.

Reason (R): Empowerment of women is related to enhancement of women’s capabilities and decision.

24. Which group of thinkers belongs to Radical feminism?

26. Women are highly concentrated in low paying jobs ____ this exemplifies

27. Which of the following pair is not correctly matched?

28. Mark out the incorrect statement about seeking divorce in India

(A) The personal laws do not discriminate between the husband’s and wife’s rights.

(B) The personal laws discriminate between the husband’s and wife’s rights.

(C) The Muslim law grants absolute power to the husband to dissolve the marriage.

(D) In the Muslim law, the wife can seek dissolution only by mutual consent.

29. Sarva Shiksha Abhiyan (SSA) was launched in the IXth Five Year Plan to

(A) Bridge all the gender and social gaps in education.

(C) Education for all.

(D) Education for the weaker sections.

30. Which of the following is not an indicator for calculating Human Development Index?

(A) Long and Healthy Life

(B) Dimension of Knowledge

32. Which of the following is not correctly matched?

33. Arrange the chronological sequence of the establishment according to the year of their initiation.

(i) UGC Centres for Women’s Studies

(A) Council on the Status of Women in India

(B) Committee on the Status of Women in India

(C) Centre on the Status of Women in India

(D) Commission on the Status of Women in India

35. Who was the chairperson of the National Commission for Self Employed Women in 1987?

36. Who has edited the book on “Narratives from the women’s studies family”?

(A) Devaki Jain and Pam Rajput

(B) Neera Desai and Maithreyi Krishnaraj

37. Assertion (A): One of the constraints faced by women entrepreneurs is the lack of confidence among women.

Reason (R): Members of the family and society are not supportive to the entrepreneurial growth of women.

38. National Commission for Child Rights was established in the year

39. The Indecent Representation of Women (Prohibition) Act, 1986 seeks to ban the depiction of women in any form which is:

(i) Indecent for women

(iii) Corrupting or injure the public morality of women

(iv) To deprive the women from certain set roles.

40. Which of the Five Year Plans stressed the need for National Policy for the empowerment of women?

41. Which of the following pair is correctly matched?

(A) Krishna Teerath – Minister for Education

42. Assertion (A): Sexism refers to the belief or attitude that one sex is inferior and less valuable than the other.

(A) Research on women, by men and for women.

(B) Research for women, by women and on women.

(C) Research on women, about women, and of women.

(D) Research of women by women and for women.

45. Among the following which is not an objective of National Commission for Women?

(A) Recommends the punishment for offenders of crime.

(C) Review of constitutional and legal safeguards for women.

(D) Advise the Government on all policy matters affecting women.

Read the following paragraph and answer questions numbers 46 to 50:

Feminists with varying intellectual frames of reference have put forth diverse positions about privileging the category of gender over women. The shift from women to gender has been viewed by some as a replacement of the study of sexual inequality with the study of the differences between the sexes (Evans 1990). They make a case for the continuing usefulness of the term ‘woman’ for analysis as against the category of gender. The category ‘gender’ is seen as diverting the focus from specific issues concerning women both in the political and academic sphere. However, feminists, especially third world, black and Dalit feminists, have underlined the dangers of presuming a set of common meanings for the category women. They have argued that the category women universalizes and hemogeneises the experiences of white, middle-class and upper-caste women. On the other hand, the use of the category gender allows for the analyses of differences of race, class, caste, nation and sexual orientation between women. The use of the category woman assumes commonality between all women and can at best allow the analysis of the differences among women in an additive or add-on manner. In the analysis of a caste based society, for instance, such an assumption of commonality amounts to a reiteration of the normative status of the upper-caste women. Often the commonality between women is assumed on the basis of their experiences of victimhood as ‘women’ in a patriarchal society. Such an assumption not only universalizes the concept of patriarchy but also argues as if the oppression of caste and class is located in some ‘non-woman’ part of Dalit women. The use of the category gender allows for an analysis of the interlocking structures of oppression and, in fact, goes beyond the analysis of the differences among women by underlining the gendered nature of caste and class oppression.

46. Mark out the correct answer

(A) The category gender universalizes and homogenizes the experiences of race, class and upper caste women.

(B) The category women allows for the analysis of differences of race, class and sexual orientation between women.

(C) The category women assume commonality between all women.

47. The category gender is useful for

(A) An analysis of the interlocking structures of oppression.

(B) The analysis of the differences among women.

(C) The analysis of nature of oppression of low caste women.

(D) The analysis of nature of oppression of both caste and class women.

48. What is the danger perceived by the feminists in using category gender over women?

(A) It will break the commonality between women.

(B) It diverts the focus from specific issues concerning women in the political and academic sphere.

(C) It will analyze the experiences of victimhood as women.

(D) It will not help in universalizing the concept of patriarchy.

49. The shift from women to gender for some feminist implies

(A) The study of differences between the sexes.

(B) The study of sexual inequality.

(C) Both the study of sexual inequality and the differences between the sexes.

(D) The study with the focus of women issues.

50. Assertion (A): The shift from women to gender for some feminists is a replacement of the study of the differences between the sexes.

Reason (R): There is the continuing usefulness of the term “woman” for analysis as against the category of gender.