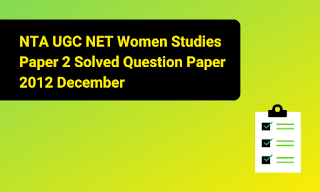 You can boost your preparation by referring to NTA UGC NET Women Studies Question Paper 2 2012 December. It will give you information about the important chapters and concepts covered in all chapters.

1. Which feminist thought suggests thatgender equality can be realized by eliminating the cultural notion of gender?

(A) Are result of differences in biological aptitude.

(B) Are roles ascribed by men and women.

(C) Roles assigned by the society to each sex.

(D) Roles assigned by the society to men.

4. Who was the first Indian Woman Chief Minister of an Indian State?

5. Choose the correct expansion of UNIFEM:

6. Which one of the given issues is not raised by the women’s organisations in the post-independence period?

(A) Lack of maternity benefit.

(B) Lack of child care provisions.

8. Arrange the chronological sequence of the legislations according to their year of enactment:

9. Among the following pair which is not correctly matched?

(A) Krishna Teerath – Minister for Women and Child Welfare

10. Assertion (A): In India, large percentage of women cannot take decision independently not even related to their own life.

Reason (R): In India, large percentage of women do not have political power.

12. Assertion (A): Teaching of feminism and women’s studies in India has been depending on western feminist theory.

Reason (R): The body of theoretical knowledge based on empirical research have not been established in India.

13. Arrange the following chronologically according to the year:

14. According to the Marriage Act, in which year the minimum age at marriage has been raised to 18 years for girls?

15. Assertion (A): Mental health is an important dimension of women’s health.

Reason (R): Mental health is viewed as interface between domestic violence and health.

16. Reproductive rights include the rights of all individual and couples :

i. Reproduction free of discrimination.

ii. Reproduction without coercision and violence.

(B) ii and iii only correct.

17. Marxist feminist attempt to explain how

i. Gender relations operate in a society.

iii. Gender relations are connected with processes of production and reproduction.

Reason (R): Nearly two third of illiterate people in the world are women.

20. Friedrich Engels in his book “The Origin of the Family, Private Property and the State”, said:

(A) Women’s sub-ordination was biological.

(B) The overthrow of mother right constituted the world historic defeat of the female sex.

21. Assertion (A): Laws do not automatically change social structure.

Reason (R): Laws are generally improperly enforced and are subject to the executive control of the State.

22. Which is not the form of qualitative research?

23. What is the expansion for IWRAW?

24. Among the following which pair is not correctly matched?

25. List out the group of autonomous organisations under Ministry of Women and Child Development:

26. Among the following pair which is correctly matched?

27. Assertion (A): Women and girls bear more consequences of gender based violence as compared with that of men.

Reason (R): Women and girls are the primary target for gender based violence.

28. Arrange chronologically the following Chairpersons of National Commission for Women from present to past:

(B) Nancy Kleiber and Linda Light

30. Arrange the chronological sequence of the establishments according to the year of their initiation.

i. Dept. of Women and Child Development

31. ‘Women’s Component Plan’ was initiated in which five year plan?

32. Among the following which is not an objective of Rashtriya Mahila Kosh?

(A) To advise the government on all policy matters affecting women.

(B) To promote the provision of micro credit to poor women.

(C) To demonstrate and replicate participatory approach in the organisation of women’s group.

(D) To link with thrift and savings with credit.

33. Assertion (A): The self-help group of women have been found very effective in organizing and sensitizing women.

Reason (R): The self-help group of women are supported by educated women.

34. The chief barriers of female education in India are:

i. Shortage of female teachers.

35. Which International Conference had the thrust on the concept of empowerment?

36. The Department of Women and Child Development provides for the schemes.

i. Short stay homes for women and girls.

38. Which Social Reformer viewed “The subjugation of women as an instrument for maintaining Brahminical dominance in Indian society”?

39. What are the indicators used for calculating the dimension ‘A long and healthy life’ of Human Development Index?

iii. Life expectancy at age I

40. According to the National Rural Employment Guarantee Act, the percentage of women beneficiaries shall be:

41. Which article of the Constitution of India provides ‘The State to make any special provision in favour of women and children’?

42. Among the following which is not an ideology of feminism?

(A) Identifying the existing social realities from the standpoint of women.

(B) Questioning the gender blindness of mainstream theories.

44. Name the Crèche Scheme introduced by the Ministry of Women and Child Development for the children of working mothers in 2006.

i. gay and lesbian politics.

(A) i and iv only correct

(C) i and ii are correct

Read the following paragraph and answer question numbers 46 to 50.

The increasing participation of women in the waged labour force has brought into focus a number of gender related issues, including inequality and sexual harassment at the work place. However, what constitutes sexual harassment, especially in the less severe form, is still being debated (Wise and Stanley, 1987, Ramazanoglu, 1987). The term sexual harassment came first into use in 1974 during a Cornell University course on “Women and Work” in which women were encouraged to talk about their experiences in the work force (Farley, 1978: xi). Unlike rape, sexual harassment had occurred for centuries without being named, as such (Bulsarnik, 1978, Backhouse and Cohen, 1978, Farley 1978, this has important implications. In Mc Kinnon’s words lacking a team to express it, sexual harassment was literally unspeakable which made a generalized shared and social definition of it inaccessible. The unnamed could not be mistaken for the non-existent.

That sexual harassment could be prevalent and yet nameless is a paradox. This may be understandable in the context of the private/public split, the “desexualisation” of organisations, and “male sexual prerogative”.

The private/public division is featured prominently in much feminist literature. There it is viewed as crucial in understanding gender relation and power allocation between men and women and between adult and children (Elshtain, 1981. Stacey and Price 1981. Hamilton, 1978). Until this century men have dominated the public realm, women have been identified with the private realm, unpaid labour biological functions and nature (Sydie, 1988).This is not to say that men have not been also dominant in the private domain.

The private/public split is crucial in understanding how sexuality views. As Hearn and Parkin comment. “Sexuality is often considered primarily biological and socially part of the private domain. Both these assumptions have been disputed.” Until very recently organisations have been viewed as “desexualized” apparently inhabited, the words of Hearn and Parkin by “a bread of strange, a sexual eunuch figures”. This portrayal, it is argued is partly related to the way organisational theorists have neglected the more general issue of gender. This avoidance has been described as “bizarre”. In addition, the process of asexual portrayal of organisation and their desexualisation have involved a number of developments. These include: Privatizing sexuality, rationality and control over the body and time.

46. According to Elshtain the use of private and public division in feminist literature is useful in

i. Understanding gender relations between men and women.

(A) iii and iv only correct.

(B) ii and iii only correct.

47. Assertion (A): Sexuality is often considered primarily biological and socially the part of private domain.

48. The term ‘Bizarre’ is associated with

(A) Inclusion of sexual harassment issues at workplace.

(B) Exclusion of sexual harassment issues at workplace.

49. Sexual harassment at workplace prevalent and yet nameless because:

i. of biological division of labour.

(C) iii and iv are correct.

50. What is the need for the term ‘sexual harassment’?

(C) iii and iv only correct.