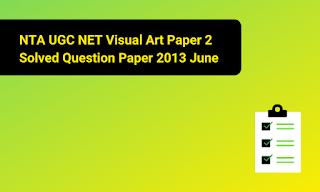 You can boost your preparation by referring to NTA UGC NET Visual Art Question Paper 2 2013 June. It will give you information about the important chapters and concepts covered in all chapters.

You must have NTA UGC NET Visual Art Solved Question Papers along with the latest Visual Art Syllabus to enhance your semester exam preparation.

Practicing these NTA UGC NET Visual Art previous year question papers assist the students in getting a clear idea about the question paper pattern and types of questions asked in the exam.

1. The sculpture titled “Horse” by Raymond Duchamp Villon is made of

2. The Lakulisha image on the lintel of Parashurameshwara temple indicates that it is associated with the sect of

3. Where was the first mosque constructed in India?

4. “Hunchback of the fishbone” is a painting by Abanindranath Tagore from his

5. Aquatint dust-box is used to spread which of the following?

6. Who among the following is known for lithographic posters?

7. Bolting cloth is used in which printing process?

8. First mechanical printing in India was brought by the

9. What is the thematic basis of Pablo Picasso’s “Guernica”?

10. Who received the first prize at the International Women’s Year Exhibition (1976) organized by Sahitya Kala Parishad?

11. Gula Mohammed Sheikh’s painting “About waiting and wandering” is executed in which medium?

(A) watercolour on paper

(B) Tempera on paper

12. “Structures of meaning”, a 1998 installation at the Victoria Memorial, Kolkata, was done by

13. Piloo Pochkhanawala worked in which medium?

(A) Delhi College of Art

15. Which object did Subodh Gupta use in his sculptural statements in a big way?

16. Which artist was a signatory of the declaration of independence and designed the American flag?

17. Advertising built around “impulse” purchase utilizing display at the place where payment is made

(A) Point of purchase

18. Sir Peter Scott, who was not a professional designer, but a naturalist, designed this logo of the organization in 1961

19. “Uncle Sam” poster, which came into use during the war of 1812, is a national personification of the government:

20. Which ad agency was proffered with the “Grands Prix” in 2008 Cannes Lions Int. Advertizing festival for “Lead India”?

21. Choose the correct chronological sequence of the Sun Temples:

25. Select the correct chronological sequence for the following artists’ groups:

26. Select the correct chronological sequence for the following artists:

27. Select the correct sequence of the following, in order of evolving technology:

28. Arrange the following in the evolution of sequence in using wood as a material for prints:

29. Select the proper sequence of steps for print-ad:

30. Choose the correct operational sequence in an advertising agency:

32. Assertion (A): German Expressionism, as in the Die Brucke, was marked by violence on form through exaggerated line and colour.

Reason (R): Because Die Brucke and the German Expressionists intended to shift beyond the purely retinal impression towards intensity of expression and subjective feelings.

Reason (R): Because the colour viscosity process can be easily executed without much technical intricacy.

34. Assertion (A): Jagmohan Chopra achieved the desired effects despite experimenting with economical method of plate making using cardboard and mount board.

Reason (R): Because metal plates were expensive and not easily available.

35. Assertion (A): Coloured pencils are more difficult to erase in comparison to graphite pencils.

Reason (R): Because coloured pencils are made of mixture of clay and pigments bound together with gum and soaked in hard-pressed wax.

36. Assertion (A): In folk art, every object of daily use is decorated and beautified.

Reason (R): Because in folk, life is utter simple and in crude form; so, the folk artist avoids the monotony of such daily objects and converts them into vivid expressions.

38. Assertion (A): Invention of drill machine made much difference to sculptors.

Reason (R): It was easier and faster to make holes; thus deeper undercuts for curls and curves were possible.

39. Assertion (A): Paul Rand is best known for his creation of “Logos” for large corporate entities like IBM and UPS.

Reason (R): The era was one of huge corporate growth after WW-II was over. The notion of corporate logo and branding was born.

40. Assertion (A): In Art Nouveau, nature was probably the major inspiration for most artists and designers.

Reason (R): Motifs from the, natural world were not the basis for most of their work since Art Nouveau was a response to industrial revolution.

42. Match the following monuments to their location:

43. Match the following paintings to their respective artists:

50. Match the following Ad Gurus with their areas of specialization:

If you have any questions about NTA UGC NET Visual Art Solved Question Papers, please let us know in the comment section.