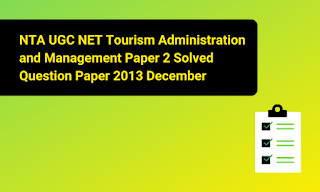 You can boost your preparation by referring to NTA UGC NET Tourism Administration and Management Question Paper 2 2013 December. It will give you information about the important chapters and concepts covered in all chapters.

Practicing these NTA UGC NET Tourism Administration and Management previous year question papers assist the students in getting a clear idea about the question paper pattern and types of questions asked in the exam.

1. Which was the year that the first systematic definition of tourist was defined at the WTO Conference at Rome?

2. Which one of the following Commissions first defined tourists in the U.S.A. in 1973?

3. The Government of India has adopted the definition of tourism from the

(B) World Tourism and Travel Councils

(A) Film to promote tourism in India

(B) Film to promote tourism in Nagaland

6. This consists of two lists of place and institutions and the candidate has to match an item in one list with an item in the other:

7. It has been described as cultural property on the UNESCO World Heritage list as “an expression of the astrological skills and cosmological concepts of the court of a scholarly prince at the end of the Mughal period”.

9. Identify the odd one from the following:

10. Padmanabhapuram Palace is located in the State of

11. This consists of two lists of statements and terms. The candidate has to match an item in one list with an item in the other:

12. “Franchise Agreement” for a restaurant is

(A) an authorization given for making, transporting and serving prepared food.

(B) an agreement based on trade by buyers and sellers.

(C) an authorization given by one company to another to sell its unique product and services.

(D) a management tool used to reward employees working in a restaurant for achieving goals.

13. ‘Silver Service’ is implemented in a

14. Which one of the following is an example of commercial non-residential catering outlet?

(A) Provision of accommodation and meals for a certain number of days to promote sales.

(B) Set of fixed menus for a set period, which are repeated for a particular period

(C) Form of food service provided by restaurants using a trolley equiped to prepare, cook and serve food in direct view of the guests.

(D) Is a method of serving food with spoon and fork from the left hand side of the guest.

16. According to Hindu mythology, which land was created by the axe of Lord Parshurama?

17. The maximum dimensions (the sum of the three dimensions) of all carry on baggage should not exceed

19. This consists of two lists of railway zones and head quarters and the candidate has to match an item in one list with an item in the other:

21. At present which of the following usually generates the highest rate of commission for travel agents?

22. Which of the following statements is true of airlines?

(A) The travel agent is the only outlet for their products.

(B) They accommodate inclusive tours on both scheduled and charter flights.

(C) They never have their own tour operating companies.

(D) They charge a commission from travel agents.

23. Which is the largest elements of retail travel agency operating costs?

24. Which one of the following flights is an example of “first freedom of air”?

(A) YTO → MEX by Air Canada flying over USA

25. This consists of two lists of Airports and their IATA codes. The candidate has to match an item in one list with an item in the other:

26. Cost based, demand based, and competition oriented methods are known as the basic approaches of

27. Alliance and Franchises are two main forms of

28. Physical facilities is often referred to

(B) Moment of truth

29. Where would you place the backpackers on Stanley Plog’s Continuum?

(A) To determine potential customer acceptance of the new service.

(B) To examine the saleability of the new service.

(C) To examine the concept of service.

(D) To evaluate whether a prospective user understands the idea of proposed service.

31. Which one of the following makes main difference between a concept and variable?

32. Which four important sets of variables may be operated to investigate a casual relationship or association?

33. The intervening variable is one which links between

(A) Mediating and moderating variables

(B) Independent and dependent variables

34. This consists of two lists of statements and terms and the candidate has to match an item in one list with an item in the other:

35. A Central Tourist Advisory Committee in India was constituted in the year

36. The Department of Tourism (Government of India) under the Ministry of Transport and

Communication was created in the year

37. In which Five Year Plan, no funds were allocated for Tourism Development in Indi?

38. For the creation of accommodation, transportation and recreational facilities at key tourist centres, separate funds were allocated under which Five Year Plan of India?

39. Tourism was accorded the status of an industry in which Five Year Plan of India?

40. The Tourism Finance Corporation of India was established in the year

41. Which one of the following is most current liquid asset for a firm?

43. The return on Shareholders capital is called

(C) Planning for one year or less

45. Leadership that is based on the attitude that the leader is self employed and that leadership style is known as

The Humayun’s Tomb was constructed by one of his widow.

Today, the tomb complex is entered by a large gate on the West, although in Mughal times the Southern gate was widely used. Upon entering any gate, the centrally situated tomb and its char bagh setting are visible. Each of the four garden plots is further subdivided by narrower waterways. Based on the char bagh types established in Iran and more fully developed in Babur’s own concept of the ideal garden, such formalized and geometrically planned garden settings became standard for all the imperial Mughal Mausolea and for those of many nobles as well. Char bagh gardens long had been associated with paradisiacal imagery. But at Humayun’s tomb, the association is all more explicit, for the water channels appear to vanish beneath the actual Mausoleum yet reappear in their same straight course on the opposite side. This evokes a Quranic verse which describes rivers flowing beneath gardens of paradise.

The Mausoleum is square in plan, 45 metres on a side. Crowned with a white marble bulbous dome and flanking chattris, the tomb sits on a high elevated plinth 99 metres per side. Each façade, faced with red sand stones and trimmed with white marble, is nearly identical and meets at chamfered corners. The west, north and east facades are marked by a high central portal flanked on either side by lower wings with deeply recessed niches. The south entrance, probably the main one, consists of lower wings on either side of a high central pishtaq, underneath which is a deeply recessed niche. The seeming simplicity of this tomb’s exterior is belied by the interior.

46. Humayun’s tomb is known to have constructed by

47. The concept of char bagh was developed in India by

48. Char bagh garden is associated with

(A) Palace of Mughal emperor

(D) Dargah of a Saint

49. The layout of the water channel evokes Quranic verses, means

(A) rivers flowing in the garden

(B) rivers flowing in the Mausoleums

50. Humayun’s tomb is decorated with

(B) A white marble bulbous dome and chattris

Year Wise NTA UGC NET Tourism Administration and Management Solved question Papers from June 2006 till today are given below.

If you have any questions about NTA UGC NET Tourism Administration and Management Solved Question Papers, please let us know in the comment section.