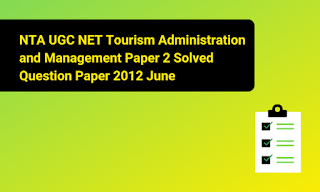 You can boost your preparation by referring to NTA UGC NET Tourism Administration and Management Question Paper 2 2012 June. It will give you information about the important chapters and concepts covered in all chapters.

Practicing these NTA UGC NET Tourism Administration and Management previous year question papers assist the students in getting a clear idea about the question paper pattern and types of questions asked in the exam.

1. A record in which passenger reservation data is stored.

2. During which plan period, Government of India made a provision for financial outlay for tourism for the first time?

4. Which one of the following is not a Special Tourism Area (STA)?

5. Tourist Visa is valid for how many days in India?

7. The SERVQUAL model is also known as

8. The Historian who identified Seven Wonders of the ancient world was

(B) Pliny the Elder

9. Which one of the following is defined as Type-I error?

(A) Response error that is accepted when it is falsified.

(B) Beta error that is accepted when it is false.

(C) Alpha error that is rejected when it is true.

(D) Standard error that is rejected when it is in fact true.

10. The list consists of two lists of Sampling methods and their respective strengths. The candidate has to match an item in one list with an item in the other.

11. Which one of the following is explained as Type-II error?

(A) Mean error that is not rejected when it is false.

(B) Population error when it is neither rejected nor accepted.

(C) Betaerror that is accepted when it is false.

(D) Sample error when it is accepted.

12. Which organisation is recently celebrating 150 years of its foundation?

(B) Venturesome and Pleasure seeker

14. A car rental site located near the Airport terminal but not directly on the premises of the Airport is called

(A) Drop off point

(B) Pick up point

15. A ‘pass’ entitling the holder to unlimited rail travel throughout England, Scotland and Wales is known as

16. The DND cards in a maid’s trolley belong to

17. Name the under liner cloth used on a restaurant table.

18. ARR is the term used in hotel industry for identifying

I. Representative of the elements of the target population

III. A compilation of sub-population elements in the universe.

IV. A subset of the population representing from the study.

(D) II and III are correct.

20. Which one of the following are parametric test tools?

21. Which places are covered by “the palace on wheels”?

22. In how many countries ‘Schengen Visa’ is valid?

23. Who is the youngest Indian mountaineer to climb Mt. Everest till 2011?

24. Which is the longest train service in India?

(A) Him Sagar Express

25. Which hill station is not served by Toy Train?

26. Where is the Mousoleum of Emperor Akbar?

28. Which is not a major seaport on Eastern Coast of India?

29. Which one of the following is not a classical dance?

30. The world celebrated the 150th birth anniversary of the creative genius of Bengal in 2011.

31. Arunachalesvara temple is considered as one of the oldest and longest temple in the world and is situated in

32. This consists of two lists of historical monuments / sculptures and places. The candidate has to match an item in one list with an item in the other.

34. A three letter code designating the type of aircraft used for passenger flight or cargo transport is known as

35. A term for reheating/regenerating space used by the flight crew to heat or prepare passenger meals on an aircraft

36. The famous Meenakshi Temple is situated in

37. A Segment of a connection or if a direct flight involves a change of aircraft, any portion between a board point and off-point is known as

38. In an air itinerary, the destination point used to determine the round trip fare or maximum permitted mileage

(A) Turn around point

39. Where is the highest railway station in India?

(A) Kalka on the Shimla Mountain Railway.

(B) Ghoom on the Darjeeling Himalayan Railway.

40. Haji Ali Dargah is located in

41. When was the first National Park in India set up?

42. This consists of two lists of places andthe names of temples and the candidate has to match an item in one list with an item in the other.

43. This consists of two lists of Rural Tourism Projects, and the Place (State)

44. Which is the first privately built International Airport of India?

(B) Creative and Media Strategy

46. Seasonality of travel can be smoothened by adopting which one of the following method

47. Assertion (A): Tourism as a product has the elements of both tangibility and intangibility.

Reason (R): A part of Tourism product can be physically experienced.

48. Assertion (A): Travel agents are now reinventing themselves as consultants.

Reason (R): The development of technology has automated many functions of travel agent.

49. Name the Behavioural Scientist who developed the ERG theory of motivation?

50. Managerial grid model is meant for

Year Wise NTA UGC NET Tourism Administration and Management Solved question Papers from June 2006 till today are given below.

If you have any questions about NTA UGC NET Tourism Administration and Management Solved Question Papers, please let us know in the comment section.