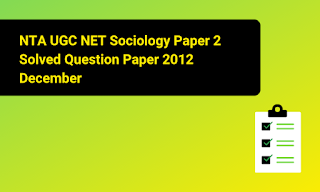 You can boost your preparation by referring to NTA UGC NET Sociology Question Paper 2 2012 December. It will give you information about the important chapters and concepts covered in all chapters.

1. Which one of the following is not a characteristic of a primary group?

(C) Relations are end in themselves

(D) Relations are means to an end

2. Who, of the following, is the author of the book “Economy and Society”?

3. Which one of the following is not an element of rural community?

4. Choose the correct sequence of following in order of increasing complexity:

5. Sociology is characterised by a perspective that places ________ in the foreground.

6. When two people interact with each other, they form

7. Which one of the following Max Muller believed to be the earliest form of religion?

9. The term ‘Reference group’ was first introduced by

10. Match List – I with List – II and mark the correct answer from the codes given below the lists:

11. The pivotal methodology of functionalist is

12. To Mead the ‘generalised others’ and ‘significant others’ are the creators of

13. The collection of roles that goes with a given status is termed as

(B) Conflict of roles

14. Assertion (A): The situation in which a person is faced with demands from two or more roles that do not match is called role conflict.

Reason (R): Role conflict is not common in traditional societies where each person plays a limited number of roles.

Choose the correct answer from the given codes:

15. Who has written the book “urbanisation and family change”?

16. Who studied the structural and functional unity of joint family in ‘Mahua’?

18. Who said that the social stratification in India is based on ‘purity and pollution’?

19. Who has given functional theory of social stratification?

21. Marxian theory of change, ‘that change comes through revolution’ indicates

(A) Change in the existing structure.

(B) Change of the whole structure.

(C) A partial change in the existing structure

(D) A nominal change of the structural elements.

22. Match List – I with List – II and select the correct answer from the codes given below the lists:

23. The basic difference between classical and modern sociological perspectives is visible in the

(A) Silent shift from macro to micro theoretical perspective

(B) Radical shift from micro to macro perspective

25. From among the following who believed in Social Darwinism?

26. Parsons’ analysis of social system is based on the principle of

(B) Division of labour

27. Who started his book “The Structure of Social Action” with the rhetorical question “who now reads Spencer”?

28. Phenomenology is a radical alternative to

29. Durkheim’s study of suicide helps us to understand

(a) Society’s hold over the Individual

(b) Individual’s hold on the society.

30. In Merton’s functional analysis of society which of the following concepts are central?

(a) Functions and Dysfunctions

(b) Structural elements and functional pre-requisites

31. “Kula” was associated with

(2) The belief that events in the world are mobilized by the activities of spirit.

(3) The belief in worshipping the animals.

(4) The belief in worshipping the natural objects.

33. In his evolutionary framework Marx arranged societies in the order of

The correct order is

34. Assertion (A): For the emergence of capitalism, a particular motivation was required with regard to profit and work.

Reason (R): Capitalism was developed in the west because such a motivation was provided by Calvinism.

Select your answer from:

35. Assertion (A): Functionalism considers human society as a social system, as a set of interconnected parts which together form as a whole.

Reason (R): Social Institutions such as education and religion are viewed as a part of the social system rather than as isolated units.

38. The book “Street Corner Society” was authored by

39. The figure that most frequentlyoccurs in a given set of data is known as

41. Who has given the formula for calculating rank correlation?

42. An idea about a given state of affairs put forward in exact terms to provide basis for empirical testing is known as

43. Match List – I with List – II and select the correct answer from the codes given below the lists:

44. Attribute is related to

45. Match List – I with List – II and select the correct answer from the codes given below the lists:

47. What is the correct sequence of understanding research methodology?

(B) Nature of phenomena, nature of social science, method of data collection, methods of data analysis

48. In case of doing a research which is the correct sequence?

(A) Formulation of the problem, data collection, hypothesis, analysis of data

(B) Data collection, hypothesis, formulation of the problem, analysis of data

49. After data collection which is the correct sequence of the following steps?

(A) Editing of filled in tool, coding, report writing, tabulation

(B) Coding, report writing, editing the filled in tool, tabulation

50. Coefficient of correlation (r) indicates the extend of relationship between