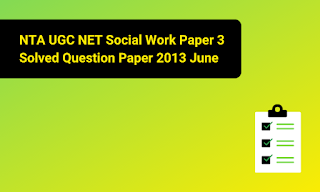 You can boost your preparation by referring to NTA UGC NET Social Work Paper 3 Question Paper 2013 June. It will give you information about the important chapters and concepts covered in all chapters.

(A) The Little Community

(B) The Small Community

2. Emotional disorders in which an individual remains oriented to reality but suffers from chronic anxiety is

3. One of the following theories is known as growth oriented theory

4. A concept made measurable is called

5. Intervening variables can be controlled by

6. Which government body promotes measures for care and protection of persons with disability in the event of death of their parents or guardians?

(B) Central Social Welfare Board

7. The author of the book, ‘Practice of Social Research-Social Work perspectives’ is

8. Detachment from work, inability to accomplish goals and emotional discharge is known as

9. Which conference has brought in the concept of sustainable development?

(A) The Rio Conference

(B) The Doha Conference

10. One of the following is not an aim of social policy.

(B) Elimination of poverty

12. Scientific attitude is based on

13. ‘Concentric circle theory’ is associated with

(B) Economic status of the country

14. Who defined ‘Statistics as the Science of estimates and probabilities’?

(A) The measure of the average relationship between two or more variables in terms of the original units of data.

(B) Based on the assumption that the data being studied is normally distributed.

(C) The sum of the differences of two variables.

(D) Deviations that are taken from an assumed mean.

16. After passing of a bill in both the houses of Parliament and after President’s assent, within how many days the bill should come into force?

17. Determinant of population growth is

(A) Beggars begging at religious places.

(B) The able-bodied beggars

(C) A class of beggars who are handicapped.

(D) Beggars who beg in a particular season.

19. ‘Reaching inside the silence’ is a skill that refers to

(A) Efforts to explore the meaning of the client’s silence.

(B) Efforts to explore the means to break the client’s silence.

(D) Efforts to encourage client to be silent who speaks more.

(A) Consolidation, initiation, expansion and termination.

(B) Initiation, consolidation, expansion and termination.

21. Encoding is essential for

22. World No Tobacco day is observed on

23. In classical conditioning, what happens to a neutral stimulus after it is associated with the unconditioned stimulus? It becomes

(A) A conditioned stimulus.

(B) Think without emotions.

(D) has difficulty in managing own emotions.

(B) Helps individuals cope with their internal and external state of anxiety and distress.

(C) Cannot be brought under conscious control to ward of anxiety.

(D) Operate to maintain a sense of serenity.

(A) Those aspects of a culture that are held in high regard, are desirable and therefore worthy of emulation.

(B) Principles of right and wrong actions and the rules & laws that govern the acceptable &unacceptable behaviour.

(C) Made up of a set of expectations about low people should behave in certain circumstances.

28. Without warmth the professional social worker may be ‘technically correct but therapeutically impotent’ has been said by

29. Who gave the three dimensional model of personality – the child, the adult, the parent?

(A) Solving problems through insight.

(B) Bringing behaviour under stimulus control.

(C) Demonstrating learning in the absence of reinforcement.

31. One of the following techniques contributes a lot for the skewed sex ratio.

32. In which year the National policy for women empowerment was announced?

(A) Customary elimination of discrimination against adult women.

(B) Conference on elimination of all forms of discrimination against women.

(C) Convention on empowerment and development of adult women.

(D) Convention on elimination of all forms of discrimination against women.

34. What Act deals with ‘Intimate Violence’?

(B) Violence against Women Act

35. Marginalization of targeted individuals, excluding them from community life and denying access to resources is called

36. International Day for the disabled is celebrated every year in the month of

37. Rehabilitation Council of India was established in the year

38. The first World Assembly on Aging was held in

39. The Chairperson of National Human Rights Commission holds office for a period of

40. Provisions relating to economic and social justice are incorporated in which part of Indian Constitution?

41. Perceiving something which is not physically present is called

43. The salient features of National Policy for persons with disability are

(B) Educational and vocational rehabilitation.

44. The law of three stages of Social Development is originally propounded by

(A) Institution for open air treatment of tuberculosis.

(B) Institution for help of elderly people.

(C) Institution for the treatment of mentally sick.

(D) Institution for the treatment of lepers.

(A) International certification of diseases.

(B) The 10th revision of the International Classification of diseases.

47. Ethical dilemmas in social work include instances where practitioners face

(A) Conflicting duties or obligations

48. In which part of the Indian Constitution social policy is outlined?

50. Match items in List-I with List-II and choose the correct code given below:

51. Match the following persons list-I with the area that they are associated with list-II

53. Assertion (A): Technological advancement adds to the complexity of human society.

Reason (R): To keep the advancement giving some of its negative implications need to be understood and dealt with

54. Assertion (A): Social worker should make an eye contact with client during interview process.

56. Assertion (A): Social Diagnosis is the important part of social case work process.

Reason (R): It is a reflective thinking that gives direction to problem solving process.

57. Assertion (A): Code of ethics is a pre-requisite for a professional social worker.

Reason (R): Social work values and principles are important for the practice of Social work.

58. Assertion (A): Developmental programs meant for tribals have not produced desired results.

Reason (R): Lack of political will and administrative commitment are held as the major reason for tardy progress of tribes in India.

59. Assertion (A): Criminals are not born but made.

60. Assertion (A): Social legislations are effective means of ushering social change in given society.

Reason (R): When social legislations are with limitations and loop holes, they fail in bringing the expected social change in given society.

61. Following are the steps of Social Research. Arrange the steps in a logical order to prepare a plan of Research Study.

(e) Processing and analysis of data

62. Arrange the following Acts in order in which they were enacted. Use the codes given below:

(i) The Factories Act

63. Gender is defined as

I. A social construct

64. The various types of measurement are

(A) Nominal, Ordinal, Interval and Ratio.

(B) Nominal, Interval, Likert and Ratio.

(A) A software package

(B) Acceptable knowledge in a field of study

(D) A form of inter viewing

66. What is the proper sequence of the following?

67. The statement that ‘As variable A changes, there will be corresponding change in variable B’, demonstrates what kind of relationship among variables?

68. Who among the following is associated with Gestalt therapy?

69. One of the following is not a part of Memorandum of Association.

I. Name of the society

II. Address of the registered office

III. Objects of the society

IV. Logo of the society

70. What types of evidence can only be given to a court by an expert?

Read the passage given below and answer the following questions as per the understanding of the passage (Qu. Nos. 71 to 75)

The post liberalized and globalized Indian economy is witnessing shrinking role of state and growing role of Corporate and Business in overall development of country. Corporate with their wider reach, professionalism, innovation and wealth have the ability to influence the pace of growth and development. In recent survey it was found that the public expectations from corporate and business are growing. Indians feel that business sector must play a wider and more expansive societal role. In addition to providing good quality products at reasonable prices, companies should strive to make their operations environmentally sound, adhere to high labour standards, reduce human rights abuses and mitigate poverty.

Corporate Social responsibility in the past few decades has intrigued not only the scholars but the practioners as well. It is essentially a concept whereby companies decide voluntarily to contribute to a better society and a cleaner environment. Companies consider themselves as an integral part of the society and act in a socially responsible way. Till very recently it was viewed as philanthropic activity indulged into only when the firms were in jeopardy. But it is now viewed to be inclusive, broad and diverse. CSR is now viewed as integral part of business strategy to minimize the business risks linked to uncertainty.

Most of the multinational Corporates have their CSR wing and department exclusively dedicated for doing community development and CSR activities directly or indirectly in the vicinity of their operations. They recruit professionals from social work, rural development and other developmental fields to undertake and manage the CSR activities of company. It is observed that companies whose operations directly impact the nature like mining, manufacturing, power generations etc. have CSR wing quite active to tackle the grievances of nearby population and engage the stakeholders. In green field projects, we have seen corporate giant and Govt. struggling hard to get the land acquisitions and Resettlement and Rehabilitation (R & R) issues solved, here also CSR professionals are in great demand.

This is hard to clarify due to the diverse roles and range of disciplines involved. Though the major skills required for successful CSR Professional are business skills, people skills and technical skills. From above three skills, following six core competencies are listed for managers involved with CSR in organizations viz. Understanding society, building capacity, Questioning business as usual, stakeholder relations, strategic view, and harnessing diversity.

71. After liberalized and globalized Indian economy, what are public expectations from corporate and business world?

72. Why should corporate and business work for society?

(A) To improve their business outcome.

(B) Corporate consider themselves as integral part of the Society and therefore act in socially responsible way.

(C) To improve their image.

73. How can CSR in corporate world be best managed?

(A) There should be a separate wing or department to manage CSR.

(B) Chief Executive of the Company

74. What skills a CSR professional should have to effectively deliver the services to society?

(B) Philanthropic and helping skills

75. What should be the core competencies of a CSR professional?

(A) Understand the community

(B) Capacity building of people in community

(C) Harnessing the diversity in the community