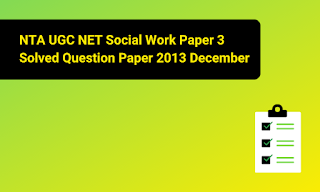 You can boost your preparation by referring to NTA UGC NET Social Work Paper 3 Question Paper 2013 December. It will give you information about the important chapters and concepts covered in all chapters.

1. Blocking a wish or desire from expression is termed as

2. Which among the following is not a component of client case worker relationship?

3. _____ is the first settlement in U.K. which is associated with group work.

4. Social learning theory is associated with

5. Amartya Sen is associated with which of the following concepts?

6. Which among the following is not a symptom of schizophrenia?

7. Mean difference is also called as

8. Which of the following is an antisocial element?

9. The review of questionnaire with the object of increasing accuracy is

10. The book entitled “Two Treaties on

Civil Government” is by

11. The ‘Employees Provident Fund and (Miscellaneous Provisions) Act’ was passed in the year

12. Social group work as a method does not help

(A) individuals to enhance social functioning through purposeful group experience.

(B) community to solve problems of groups in a community.

(C) provide a context in which individuals help each other.

(D) individuals and groups to influence and change social situations.

13. Who propounded that social action is mass betterment through propaganda and social legislation, a method of bringing about a change in the social environment of the clients?

14. Which Article of Constitution of India suggests for the protection from social injustice and all forms of exploitation and promotion of economic and educational interests of the weaker sections of the people?

16. The largest professional social work association in the United States is:

(A) International Federation of Social Workers

(B) National Association of Social Workers

17. The Central Government Scheme to prevent trafficking of women and children for commercial sexual exploitation is

18. Conscientization model is associated with

19. Which among the following is not an award instituted by the Ministry of Labour and Employment?

20. The flexibility in handling change is termed as

21. The two main forms of social stratification are

(A) Class and Estate

(B) Society and Community

22. The book ‘Social Diagnosis’ was written by

23. The points of scatter plots will seem randomly distributed among the quadrants when little _____ exists between the variables.

24. The specific characteristic of a subject that assumes one or more different values is called as

26. The chronic condition present from birth with impaired adaptation towards daily demands is

(C) Both of the above

27. Repression is also known as

(A) Roaming in the past

28. The base of age pyramid in India is broad due to

29. Difficulty in falling asleep is called

31. The book ‘Social Work Philosophy’ is written by

32. Who amongst the following is a leading contributor to our understanding of groups as a system?

33. Which one of the following is not a correctional programme/service?

34. Psycho social theory was propagated by

35. _______ helps in reclassification of variables and causal inferences.

(B) Analysis of data

36. The influence of one variable on the other can be analysed by using

37. Which among the following does not come under probability sampling?

38. Which one of these are techniques of social case work?

39. To carry out Broker’s role the social worker:

(A) thoroughly understand the client’s situation, his motivation, capacities and opportunities for change.

(B) identifies client needs, assess their motivation and capacity to use various resources and helps them gain access to the most appropriate resources.

40. Which of the following is the most important task of an effective group leader?

(B) Assert group to achieve the desired goal

41. Latent learning is an example of

42. The book entitled ‘The Mentality of Apes’ by Wolfgang Kohler, is about

43. Who amongst the following scholars has described tribal population as ‘submerged humanity’?

44. Correlation is a statistical tool for

(A) Discovering and measuring the relationship and expressing it in a brief formula.

(D) Locating the point around which variables cluster.

45. Marriage is defined as

(A) An approved social pattern for establishing a family.

(B) A socially sanctioned union of male and female.

(C) A contract for production and maintenance of children.

46. The part of mind that lies on reality is

47. Which among the following is not the purpose of Human Resource Planning?

(A) Configuring fixed skill setup for the departments in a same manner.

(A) Free compulsory education for all children up to 14 years of age.

(B) Right to Education and work.

(D) Educational grants for the benefit of Anglo-Indian communities.

49. Classical conditioning was propagated by

(A) known as three areas of a continent where drug supply is common.

(B) known as a set of three countries producing heroin.

(C) a combination of three countries with sound economic position.

(D) a combination of three countries with poor economic position.

51. Match List-I with List-II and select the correct answers from the codes given below:

52. Match List-I with List-II and select the correct answers from the codes given below:

53. Match List-I with List-II and select the correct answers from the codes given below:

54. Match List-I with List-II and select the correct answers from the codes given below:

55. Which one of the following pairs is correctly matched?

56. Match List-I with List-II and select the correct answer from the codes given below:

58. Assertion (A): Every human being has to be regarded as a person with dignity and worth.

Choose your answer from the codes given below:

59. Which one of the following is not an objective of fieldwork?

(A) To relate class-room instructions into the real life situations.

(B) To develop skills in working with target groups.

(C) To work as a member of staff at the agency.

60. Assertion (A): Human beings are not subservient to State.

Reason (R): All human beings are born free and equal in dignity and rights.

Choose your answer from the codes given below:

61. Assertion (A): Research Studies overlapping one another are undertaken quite often for want of adequate information.

62. Assertion (A): In a simple random sample of a given size, all such subsets of the frame are given an equal probability.

Reason (R): Any given pair of elements has the same chance of selection as any other such pair.

63. Assertion (A): Personality is the particular combination of emotional, attitudinal, and behavioural response patterns of an individual.

Reason (R): Personality refers to enduring personal characteristics that are revealed in a particular pattern of behaviour in a variety of situation.

64. Assertion (A): The phase and complexity of any group will be the same.

65. Assertion (A): The criminal justice system is designed to punish and reform the criminal.

Reason (R): The law in India is not victim-oriented.

66. Following are the steps of social research, arrange the steps to prepare a plan of research study:

(5) Processing and analysis of data

67. Identify the correct sequence among the following:

68. Arrange the different phases of disaster management in correct sequence:

(i) Warning messages on the impending disaster.

69. Arrange the following steps in the proper sequence:

1. Attending the call on child helpline.

2. Producing the child before the Juvenile Justice Competent Authority with case details.

3. Picking up the child and seeking permission to provide shelter.

4. Assessing the child’s needs and

5. Sending the child to after care home.

70. List the following days of international observance in the order of their occurrence in the calendar month of October.

Read the passage given below and answer the following questions as per the understanding of the passage (Question Nos. 71 to 75)

Ageing can generally be described as the process of growing old and is an intricate part of the life cycle. Basically it is a multi-dimensional process and affects almost every aspect of human life. Introduction to the study of human ageing have typically emphasized changes in demography focusing on the ‘ageing of population’- a trend, which has characterized industrial societies throughout the twentieth century but in recent decades, has become a worldwide phenomenon. Ageing is basically the result of a two dimensional demographic transformation which is explained by overall declines in mortality and fertility.

Although the proportion of elderly in the years 60 and above is considered to be relatively low in the case of the developing countries such as India and China, they have a larger population base. Developed countries have aged with high social and economic development, the socio and economic condition of the elderly in the developing world is a cause for concern as most of them end up in living below poverty line in old age due to inefficient social security. The poverty and deprivation are very common among the aged in the country as it does not have proper safety nets either state sponsored or socially build.

The lives of many older people are more frequently negatively affected by the social and economic insecurity that accompany the demographic and developmental process. The growth of individualism and desire for the independence and autonomy of the young generation affect the status of the elderly. The studies show that the socio-economic condition of older women is more vulnerable in the context of the demographic and socio-cultural change. The condition of elderly poverty has been a consistent phenomenon in the Third World as the older population is deprived of the basic needs.

Social scientists described the eight diminutions of deprivation among the elderly as poverty, social inferiority, social isolation, physical weakness, vulnerability, seasonality, powerlessness and humiliation of the aged. Poverty is sought to be a major risk of ageing in developing countries and study by the World Bank reveals that in the most of the developing countries, older people are vulnerable.

71. Aging is basically the result of a demographic transformation which is

72. The reason for a growing poverty and deprivation among the aged in the country is:

(B) Breaking of Joint families

73. The deprivation among elderly include

i. Poverty and social Inferiority

ii. Decline in mortality and fertility

iv. All the above

(A) i and ii are correct

(B) ii and iii are correct

(C) i and iii are correct

74. Factors responsible for the present states of elderly

iii. Dependence of the young generation

iv. None of the above

(A) i and ii are correct

(B) ii and iii are correct

(C) only iii is correct

(D) only iv is correct

75. Which of the following is considered as a major risk of aging in developing countries?