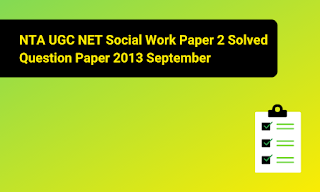 You can boost your preparation by referring to NTA UGC NET Social Work Question Paper 2 2013 September. It will give you information about the important chapters and concepts covered in all chapters.

Practicing these NTA UGC NET Social Work previous year question papers assist the students in getting a clear idea about the question paper pattern and types of questions asked in the exam.

1. Which one of the following is not an indicator of social development of a country?

(C) Incidence of litigation in the courts

2. The Child Marriage Restrain Act was enacted in the year

3. The best example of verbal communication skill is

(B) Competence in oral presentations

(D) Participate in training and research

4. Acceptance is a principle of social work which implies

(A) Accepting client in his/her appearance.

(B) Extending warm welcome to the client.

(C) Accepting the client as he/she is.

(D) Accepting the client’s version as it is.

(A) Geographical division of land

6. What is Anuloma marriage?

7. Identity V/S role confusion is the task of

10. Assertion (A): Sigmund Freud claims that sex instinct is the source of all human endeavours.

11. Assertion (A): Social work profession recognises the family as an important system in its own right.

Reason (R): The family as a unit is worthy of study and intervention.

13. Mandatory testing for HIV/AIDS can be done when

(i) Government wants it.

(ii) One wants to know about HIV/AIDS patients in the population.

14. Which of the following does not threaten internal validity?

(A) Maturation of passage of time

15. The hypothesis by which the researcher not only asserts that the variables will be found to be related, but also predicts the direction of their relationship is called

17. The National Commission for Women was established in the year

18. Kaka Kalelkar was associated with

19. The method by which the relative worth of Jobs in an organisation is determined is called as

20. Arrange the following Acts in order in which they were enacted. Use the code given below:

21. Cognitive needs’ of human beings are the needs

(A) to develop abilities

(B) for symmetry, order and beauty

(C) for security and freedom from attack

(D) to know, to understand and to explore

22. ‘Learned helplessness’ is a concept based on

24. Which one of the following is not necessary for project formulation?

(A) Setting objectives and targets

(B) Design of strategies

26. Match items in List – I with List – II and choose the correct answer from the codes given below:

27. Which one of the following is not a treatment group?

28. Indecent Representation of Women (Prohibition) Act was enacted in year

29. Which of the following governance mechanism is the highest body for policy formulation in NGOs?

31. Objectively in research means the willingness and ability to examine evidence dispassionately is called

(A) espirit de corps of the scientific method

(B) cours de philosophic of the scientific method

32. In participatory development, people’s participation is

(A) an end, not just a means to development

(B) only a means to development

(C) neither an end nor a means to development

(D) only a means not an end to development

33. If the client persists in verbal attacks, the technique used is

34. ‘Power’ is gained whereas ‘authority’ is

35. The point where two axes intersect is known as

36. The value that is repeated most often in data set is known as

37. Who among the following said that justice is crucial to understand human rights?

38. The Universal Declaration of Human Rights was adopted in

39. Assertion (A): Maintaining case files is an important duty of a psychiatric social worker.

40. Assertion (A): Human Resource Manager have to be a good human being.

Reason (R): Human values and ethics should be essential part of management education.

41. Assertion (A): When professional social work ingrains itself, in a practice modes, it can reduce the enormity of social problems in a given society.

42. A set of guidelines that give direction to action by an organization or government is called

43. Match the following fears with their technical names:

44. Assertion (A): Drug abuse has been on the increase.

Reason (R): The control of family and intergenerational communication is declining.

Read the passage given below and answer the following questions as per the understanding of the passage (Question Nos. 46 to 50)

History has led to vast inequalities, leaving almost three-fourths of the world’s people living in less-developed countries and one fifth below the poverty line. The long-term impact of past industrialization, exploitation and environmental damage cannot be wished away. It is only right that development in this new century be even more conscious of its long-term impact. The problems are complex and the choices difficult. Our common future can only be achieved with a better understanding of our common concerns and shared responsibilities.

Poverty and a degraded environment are closely inter-related, especially where people depend for their livelihoods primarily on the natural resource base of their immediate environment. Restoring natural systems and improving natural resource management practices at the grassroots level are central to a strategy to eliminate poverty.

The survival needs of the poor force them to continue to degrade an already degraded environment. Removal of poverty is therefore a prerequisite for the protection of the environment. Poverty magnifies the problem of hunger and malnutrition. The problem is further compounded by the inequitable access of the poor to the food that is available. It is therefore necessary to strengthen the public distribution system to overcome this inequity. Diversion of common and marginal lands to ‘economically useful purposes’ deprives the poor of a resource base which has traditionally met many of their sustenance needs.

Literacy and a basic education are essential for enabling the poor to access the benefits offered by development initiatives and market opportunities. Basic education is therefore a precondition for sustainable development. A sizeable proportion (about 60 percent according to some estimates) of the population is not integrated into the market economy. Ensuring the security of their livelihoods is an imperative for sustainable development.

In several areas, desirable limits and standards for consumption need to be established and applied through appropriate mechanisms including education, incentives and legislation.

Several traditional practices that are sustainable and environment friendly continue to be a regular part of the lives of people in developing countries. It is therefore important to evaluate and make development decisions which structurally lead to a more sustainable society.

46. How can we achieve our common future in a sustainable development framework?

(i) Understanding the long term impact of past industrialization.

47. What are central to a strategy to eliminate poverty and thereby ensuring sustainable development?

(B) Exploitation of National Resources

48. How does the survival needs of poor people affect sustainable development?

(A) Diversion of common and marginal lands to economically useful purposes.

(B) Poverty magnifies the problem of hunger and malnutrition.

49. What are essentials for enabling the poor to access the benefits offered by development initiatives and market opportunities?

(i) Ensuring security of livelihoods

50. What needs to be encouraged to ensure sustainable development?

If you have any questions about NTA UGC NET Social Work Solved Question Papers, please let us know in the comment section.