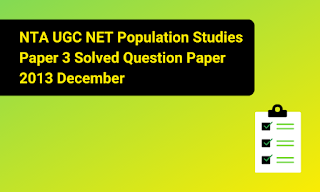 You can boost your preparation by referring to NTA UGC NET Population Studies Paper 3 Question Paper 2013 December. It will give you information about the important chapters and concepts covered in all chapters.

Practicing these NTA UGC NET Population Studies Paper 3 previous year question papers assist the students in getting a clear idea about the question paper pattern and types of questions asked in the exam.

Read the following passage and answer the questions below (1 to 6):

The Central Government provides for environmental protection by ensuring safe management, handing and disposal of biomedical and radioactive waste. Biomedical waste means dry solid, fluid or liquid waste including its container and any intermediate product, which is generated during the diagnosis, treatment or immunisation of human beings or animals in research including the animal waste from slaughter houses. Disposal means discharge, deposit, dumping, and land filling or placing on land of any biomedical waste. There are persons and organisations responsible for these activities. The authorized persons include in-charge of a hospice such as hospital, nursing home, clinic, dispensary, laboratory, health centre, animal house, slaughter-houses including those established by or under the control of government, which generates and handles any biomedical wastes.

The combustible waste is converted into non-combustible by incineration. Some treatment is also done to render such waste non-hazardous to human health and environment.

1. Biomedical waste includes which of the following?

(B) Waste generated during diagnosis, treatment and immunisation

2. Safe disposal of hazardous waste is necessary for which of the following reasons?

(B) To ensure clean environment.

3. Disposal of waste refers to which of the following?

(A) Depositing the waste in far off place.

(B) Dumping the waste in landfills.

(C) Discharge, deposit, dumping and land fill by waste in places away from habitation.

4. Nursing homes, laboratories, animal houses and slaughter houses are responsible for which of the following waste related activities?

(B) Generating and handling biomedical wastes

5. Incineration is a process which issued to

(B) Collect ash from the waste

(A) Safe management of waste

(B) Safe handling of waste

(C) Management and disposal of waste

7. Which one of the following is not correctly matched?

(B) Logistic Curve: Pattern of Mortality

8. Match the contraceptive methods with the technique/ingredient:

10. The PNDT Act was enacted to stop

11. Maximum life-time male migrants in India are observed in which of the following streams?

(A) Rural to Rural

(B) Rural to Urban

12. Percentage of life time female migrants in the total female population of India is around:

13. The maximum proportion of female headed households is found among:

15. Rural-urban fringe is a

(A) A functional zone around a city

(B) An administrative unit on the fringe of a city

(C) A commercial and industrial hub-buh of a city

16. In Christaller’s model of central places, K-3 stands for

17. In Christaller’s Central Place Theory, which one of the following alphabets represents the largest boundary of the region?

(ii) At least three AN checkups during pregnancy

(iii) Consumption of at least 90 IFAs

(iv) At least one TT Full ante-natal coverage of a pregnant woman will mean the following:

20. According to the Sample Registration System in India, the level of infant mortality rate in India is close to the following figures:

21. The Sample Registration System does not provide data on

(B) Sex and marital status

(C) Fertility and Mortality levels for India and bigger States separately for rural and urban areas.

22. Which among the following year Government of India conceived the Annual Health Survey?

23. Assertion (A): There are many environmental issues in India namely air pollution, water pollution, garbage disposal and high rate of growth of the country’s population.

Reason (R): Economic development and high rate of growth of the population is causing environmental issues.

24. Who among the following proposed Wealth Flow Theory in the area of fertility?

25. We use the method of age standardization of fertility to

(A) Exclude effect of age distribution in measuring fertility

(B) Exclude effect of differences in fertility

26. Who among the following has written the book ‘Population Bomb’?

27. High Density of Settlements occurs in the

28. A metropolitan city in India is a city with a minimum population of

29. The structure of a settlement at a given point of time, is a function of

(A) Forces of concentration

(B) Forces of dispersion

30. Central Place Theory is based on the principle of

31. A Central Place Region is a

32. Arrange the following States by their current level of natural growth rate, from high to low.

33. Think of different columns of life tables like lx, nqx, nLx and TX. Survival ratio at age 15 to age 45 is computed as

34. Some important National/ International days are shown in List – I and their dates in List – II. Match the days with their dates:

35. In India, sources of data for computation of TFR could be

Code the combination of sources which are correct for India.

36. Arrange the following indicators according to their refinement level, from least to the most refined:

(A) International Agreement for Emission Education in the Convention on Climate Change.

(B) A city with this name in Japan.

(D) Most urbanised city in Asia.

38. Rank, from higher to lower, the following North-Eastern States by their literacy level in 2011.

39. Rank the following Union Territories in ascending order by population density in 2011 Census:

a. NCT of Delhi

b. Dadra and Nagar Haveli

40. DOTS is a national program to address

41. Arrange in ascending order the causes of maternal mortality in India.

42. As per 2011 Census, effective literacy rate in India is about

43. Which is the most literate district in India?

44. Which is not a part of the goals of National Population Policy 2000?

(B) Improve age of marriage

45. Match the following national programmes with their objectives:

46. Which of the following is the primary component of Janai Shishu Suraksha Yojana?

(D) All the Above

47. Which among the following States has the lowest maternal mortality ratio?

48. Which among the North-Eastern States of India has the highest fertility?

50. According to 2011 Census, which of the following is the most urbanised State in India?

51. ‘Health for All’ Declaration was signed in which city?

52. The last international convention on climate change was held in

53. Which of the following is not related to the study of fertility?

54. Arrange the following cities in ascending order of their population size:

57. Which of the following is not a goal of National Rural Health Mission (NRHM)?

58. Arrange the following States by their sex ratio in 2011 Census, high to low (sex ratio is defined females per 1000 males):

59. Arrange the following North-Eastern States by their sex ratio (females per 1000 males) in 2011 Census, high to low:

60. Which of the following types of errors were evaluated in the Post Enumeration Survey (PES) of 2011 Census?

iii. Content of all items in the Census Schedule

iv. Content of some items in the Census Schedule

61. Which of the following is not an element of Intermediate variables in fertility analysis?

62. Rank, from higher to lower, the following four States of India according to their literacy rate in 2011:

63. What is the correct number of questions in the household schedule (for population enumeration) used in 2011 Census?

64. National Health Policy was adopted in India in which of the following years?

65. When was the National Forest Policy formulated for the first time in the independent India?

66. NACO is an organisation which deals with which of the following health concerns?

67. Which of the following services are not provided by the Anganwadi Centres?

(A) Immunisation and health check-ups

(B) Treatment of minor illnesses and referral

68. As per the norms for the health facilities in India, what population size should be served by a Primary Health Centre (PHC) in hilly and tribal areas?

69. Assertion (A): There is a decline in the number of families living below the poverty line in India since the last two decades.

Reason (R): Per Capita Income in India has increased during the last two decades.

70. Assertion (A): Human loss and damage to property due to flash floods has become common in the Himalayan belt.

71. Nodal agency for Annual Health Survey (AHS) in India is

(B) Office of the Registrar General and Census Commissioner of India

72. Which of the following deaths are included in computation of neo-natal mortality rate?

(A) Foetal deaths after 28 weeks

(B) Deaths in the first week after birth

(C) Deaths in the first month after birth

(D) Deaths in the one to eleven months after birth

73. Arrange the following stages in order of their occurrence:

74. Which of the following is not an institutional mechanism of National Rural Health Mission (NRHM)?

(A) Village Health and Sanitation Committee

75. Assertion (A): Earth can support infinite time of its current population.

Reason (R): Over exploitation of natural ecosystem is the reason for the current natural disasters.

The old UGC NET Examination paper-3 in Population Studies was of descriptive type till December 2011.

If you have any questions about NTA UGC NET Population Studies Paper 3 Solved Question Papers, please let us know in the comment section.