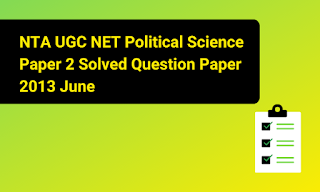 You can boost your preparation by referring to NTA UGC NET Political Science Question Paper 2 2013 June. It will give you information about the important chapters and concepts covered in all chapters.

Practicing these NTA UGC NET Political Science previous year question papers assist the students in getting a clear idea about the question paper pattern and types of questions asked in the exam.

1. What constitutes the mean in Aristotle’s social structure?

2. Whom did Machiavelli blame for the moral degradation of Italy?

3. For Hegel which one of the following is correct?

(A) Family is the thesis, Bourgeois society is the anti-thesis and the State represents synthesis.

(B) The rational is real and the real is rational.

(C) Contradictions are not obstacles preventing us reaching truth.

4. Who among the following criticized Bentham’s Philosophy as “Pig Philosophy”?

5. Which of the following is correct so far as John Rawls’ writings are concerned?

(A) A theory of Justice

(C) The Law of Peoples

6. Which one of the following Mao has not said?

(A) Political power grows out of barrel of gun.

(D) A revolution is not a dinner party.

7. Which one among the following statements is true?

(A) Behaviouralism is based on Stimulus-Response paradigm.

(B) Post-behaviouralism consists of seven tenets.

(D) There are no differences between behaviourism and behaviouralism.

8. Given below are two statements, one labelled as Assertion (A) and the other labelled as Reason (R):

Reason (R): They attacked the capitalist system itself.

9. Identify the correct sequence of the Plato’s four components of virtue:

10. Match List – I with List – II and select the correct answer from the codes given below the lists:

11. Notion of uneven development was a response to the 19th century ideas of

(B) Evolution and gradualism

13. Who among the following is associated with Institutional Approach?

14. Who among the following challenged the idea of political development as a unilinear process?

15. Which of the following pairs are not correctly matched?

(A) The existence of two religious cultures.

(C) A small elite is modernized while the vast majority remains in rigid ascriptive patterns of tradition.

(D) It is separation of the sacred from the secular.

17. Identify the correct sequence of the following input functions of Almond’s Political System:

18. The classical theory of administration is also known as

19. Pareto’s description of elites as ‘speculators’ and ‘rentiers’ resembles the characterisation of governing cliques of

21. Which of the following statements are not correct?

I. As per the provisions of the Constitution, the Council of Ministers is both collectively and individually responsible to the Lok Sabha.

II. A motion expressing lack of confidence in an individual minister is not admissible.

III. A no-confidence motion must set out the grounds on which it is based.

IV. If a no-confidence motion is passed by the Lok Sabha, the Council of Ministers is bound to resign.

22. The Avadi Session of the Congress (1956) accepted the policy of

23. What were the main findings of the Union Government administrative committee headed by Home Secretary N.N. Vohra in 1993?

(B) Minimum qualification for politicians

24. Partha Chatterjee has commented that the latest phase of the globalization of capital will witness an emerging opposition between

(A) Modernity and Democracy

(B) Feudalism and Democracy

25. The President can make a proclamation of Financial Emergency under Art. 360

(A) For the whole of India or any part of India

(B) For the whole of India except Nagaland, Tripura, Manipur, Meghalaya, Mizoram and Arunachal Pradesh

(C) For the whole of India except Jammu and Kashmir

(D) For the whole of India except Andaman and Nicobar Islands

26. Given below are two statements, one labelled as Assertion (A) and the other labelled as Reason (R).

Assertion (A): The secular ideology of the Indian State appears to be paradox in view of the deeply religious orientation of the Indian society.

Reason (R): India’s secularism was invented for integrating the multicultural plurality of the society into a common nation-state as well as for containing potentialities of the imperial ‘divide and rule’ and Muslim Leagues’ ‘two-nation’ theory in British India.

27. Dharamsala model of Indian capitalism was propounded by

(A) Dandekar and Rath

(A) To revive Congress party commitments

(B) To attract the youth to the party

(C) To plan and execute succession procedure in the party

(D) To plan gender parity in the party

29. Which of the following statements about the Central Vigilance Commissioner is not true?

(A) The Central Vigilance Commissioner is appointed by the President of India.

(C) He holds office for a term of five years.

(D) He is empowered to exercise superintendence over the functioning of CBI.

30. Which of the following statements are not true?

(i) The Election Commission of India has created a Special Election Expenditure Monitoring Division in the Commission.

(ii) The accounts of political parties are audited annually.

(iii) Paid news in connection with elections is an electoral offence.

(iv) Videography of the poll proceedings inside the polling stations is permissible.

31. Assertion (A): The arguments of C. Wright Mill’s power elites are based on the classical elitist framework.

Reason (R): Elitist formulation is not possible without reference to classical elitism.

32. The theory of “Prismatic Society” is based on

(A) Historical studies of public administration in different societies.

(B) Study of public services in developed and developing countries

(A) Deliberate upgrading of responsibility, scope and challenges.

(B) Shifting of an employee from one job to another.

34. Negative motivation is based on

35. Simon was positively influenced by the ideas of

36. Assertion (A): Classical theory of organisation is based on formal principles.

37. What is the methodology proposed by Herbert Simon?

38. Who among the following thinkers rejected the principles of administration as myths and proverbs?

39. The concept of the “zone of indifference” is associated with

40. Name the scholar who analyzed leadership as “circular response”.

43. Who coined the term “Functionalist theory of Integration”?

44. The CEPA (Comprehensive Economic Partnership Agreement) was officially endorsed in October 2010 between

(A) India and Japan

(B) India and China

45. What is the correct sequence of Morton Kaplan’s models of systems analysis?

(i) Balance of Power

(A) U.N. involvement in Somalia.

(B) Enforced the no fly zone in Bosnia

(C) Sanctioned intervention at the end of the Gulf War to protect the Kurds in Northern Iraq.

(D) Resolution on Iraq, which threatened serious consequences, if Saddam Hussain failed to reveal his weapons of mass destruction toteam of U.N. Inspectors.

48. Who enunciated International society theory as a combination of three schools of thought – Realism, Rationalism and Revolutionism?

49. Assertion (A): The decisions of the Security Council are binding, and must only be passed by the majority of nine out of the 15 members, as well as each of the five permanent members.

50. Which of the following are parts of Morganthau’s realist principle?

(i) Politics is rooted in a permanent and unchanging human nature.

(ii) Self-interest is a basic fact of the human condition.

(A) All are correct.

If you have any questions about NTA UGC NET Political Science Solved Question Papers, please let us know in the comment section.