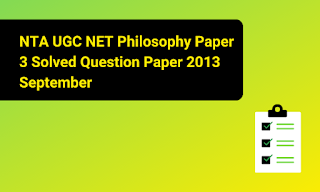 You can boost your preparation by referring to NTA UGC NET Philosophy Paper 3 Question Paper 2013 September. It will give you information about the important chapters and concepts covered in all chapters.

You must have NTA UGC NET Philosophy Solved Question Papers along with the latest Philosophy Syllabus to enhance your semester exam preparation.

Practicing these NTA UGC NET Philosophy Paper 3 previous year question papers assist the students in getting a clear idea about the question paper pattern and types of questions asked in the exam.

1. The root cause of sufferings according to Buddha is

2. The reference to Varna-dharma is found first in

3. Which of the following Purusharthas are included in Trivarga?

(A) Means to Prajñā

(B) A kind of Pāramitas

(A) Picture and reality are synonymous.

(B) There is an absolute picture of reality.

(C) There is no one picture of reality.

(D) There is no picture of reality.

6. According to Aristotle the three kinds of soul are

7. According to which of the following “theory of truth for a formal language could serve as a theory of meaning for natural language”?

8. Kant classifies categories of understanding fewer than four heads as

(A) Quality, spirit, modality and matter

(B) Quantity, quality, relation and modality

9. Which one of the following is not true of Heidegger’s Dasein?

(A) It is essentially self-conscious.

(B) It is engaged with the world.

(C) It is always an actuality and not possibility.

(D) It is always a possibility and not an actuality.

10. The proposition basic to idealism which Moore rejects is

(B) The thing in itself is non-empirical

(D) Ideas are no less real than matter

11. The theory that objects are permanent possibilities of sensations is called

13. According to Russell physical objects are

1. Life is worth living

2. Birth and death are the two ends of life

3. Honesty is one of the prime virtues.

4. Akbar was a secular Mughal emperor

15. Which one of the following is not implied by Kant’s, Copernican revolution?

(A) Rejection of Naive realism

(B) Blindness of sensible intuition without concepts

(D) Emptiness of thought or concepts without sensible intuition.

16. Descartes’ assertion, ‘I have an idea of a most perfect being’, is a premise in his

(D) Cosmological and ontological argument both

18. Who holds that acit is as much a part of reality as cit is

19. The relation of which pairs of relata mentioned below is not Samavāya?

(D) Ghata and its halves

20. The first step of teaching of Pancaila of Buddhism refrains from which of the following?

22. Who does not accept ‘Yogaja Sannikar ha’?

23. Which one is not correctly matched?

24. Select from the code which is not a means of Sābdagraha

25. ‘Fire is cold because it has coldness’ the inference commits the fallacy of

26. Who holds knowledge as a substance?

(A) Samkhya and Advaita Vedānta

(B) Samkhya and Yoga

27. Which one of the following pairs reflects two fundamental crises of Modern Culture according to Husserl?

(A) War and Terrorism

(B) Rationality and Technology

28. Who says “Consciousness is the whole or true self claiming to the legislative for its parts. Its claim is the claim of the self, as a conscious and rational being, to judge any particular manifestation of itself in voluntary action”?

29. The ‘Right of Contract’ is indispensable for

(A) Right to live

(B) Right to be free

30. As an empiricist, Locke claims that all our knowledge is derived either through sensation or

31. According to Kant, the ideas of‘reason’ are

(A) Regulative and constitutive

(B) Affirmative and negative

32. According to Kant, a person becomes aware of the freedom of his will because

(A) It is an apriori condition of the experience of obligation.

(B) He has empirical experience of it.

(C) It is an apriori condition of experience of senses.

(D) It can be demonstrated by science.

34. The ideal of Niskāmakarma implies

37. Who aims the objective study of consciousness?

40.Pañcakalpanā, according to the Buddhists, is

41. Who said that there is a central fire around which the earth, the sun, the moon and five planets move?

42. What are the objects of Sāmānyalaksana pratyaksa?

(A) Universal character of an individual

(B) Universal and the particular at the same time

(C) All the individuals belonging to a class

(D) An individual characterised by its universal.

43. Read following options and choose the right answer from given code:

1. The means may be linked to a seed and the end to a tree.

2. There is no wall of separation between means and end.

3. The realisation of the goal is proportional to the means employed.

44. Which one of the following pairs is correctly matched?

(A) Leibnitz – Pragmatic theory of truth

(B) Descartes – Correspondence theory of truth

45. According to Nyaya-Vaiśesika, the non-existence of jar on the floor is perceived because

(A) The eye is in contact with the floor, which is qualified by the floorness.

(B) The eye is in contact with the floor, which is qualified by non-existence of the jar.

(C) There is no jar qualified by floorness.

(D) There is only floor not qualified by jarness.

46. According to Nyāya school anumiti is possible without

47. The view ‘Truth of Cognition exists in its utilitarian value, is supported by

48. The conversational method of Socrates took place in the form of

(C) A kind of Dialectic

(D) As a Verbal Jugglary

49. The conceptual instrument with which inductive conclusions are expressed is

(A) The concept of necessity.

(B) The concept of relation.

(C) The concept of probability.

50. According to the feminist thinker Kristeva, religion as a language maintains the tension between an

(A) Physical needs and personal cognition of reality.

(B) Psychological needs and objective cognition of reality.

51. Utilitarians argue that natural rights should be regarded as

(A) Primary rules of conduct

(B) Secondary rules of conduct

52. Evaluate the argument and select the correct option:

53. If ‘A’ and ‘B’ are true and ‘X’ and ‘Y’ are false statements, which of the following compound statements are true?

55. In the context of correspondence theory of truth evaluate following

Assertion (A): Truth cannot be defined in terms of “a relation between object and proposition”.

Reason (R): A proposition can never be a copy of an object.

56. Inductive logic studies the way in which a premise may

(A) Support and entail a conclusion.

(B) Not support but entail a conclusion.

(C) Support a conclusion without entailing it.

(D) Neither support nor entail a conclusion.

57. Which one of the following is a tautology?

59. ‘Soldiers are never coward’ is a proposition of the form

60. The syllogism ‘Some lions are friendly; No friendly things roar,

(A) Is a valid syllogism

(B) Commits the fallacy of illicit major

61. The contrapositive of the proposition

62. An experiment held to decide with certainty between two hypotheses is called

63. If the universal quantification of a propositional function is true then

(A) Its existential quantification may be false.

(B) Its existential quantification may be true.

(C) Its existential quantification must also be true.

(D) Its existential quantification must be false.

65. According to Nyāya we know the relation of Vyāpti by

67. The basis of our knowledge of nearness and farness is

68. Which one of the following pairs is the foundation of feminism?

(A) Equality and Humanity

(B) Freedom and Humanism

69. Who holds that a special duty of a human being is strictly determined by his particular station in life and he should perform these duties faithfully to realize his highest personal good and the general good?

70. Which one of the following pairs represents a true contrast?

(A) Reflective morality – Personal choice and will

(C) Freedom of will – Determinism

73. Ethics is the study of the concepts involved in

74. “Ends justify means” is derived by the

75. According to G.E. Moore goodness is

The old UGC NET Examinations paper-3 in Philosophy was of descriptive type till December 2011.

If you have any questions about NTA UGC NET Philosophy Paper 3 Solved Question Papers, please let us know in the comment section.