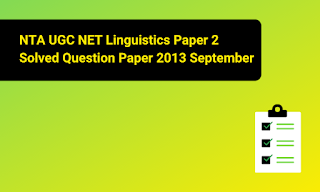 You can boost your preparation by referring to NTA UGC NET Linguistics Question Paper 2 2013 September. It will give you information about the important chapters and concepts covered in all chapters.

You must have NTA UGC NET Linguistics Solved Question Papers along with the latest Linguistics Syllabus to enhance your semester exam preparation.

Practicing these NTA UGC NET Linguistics previous year question papers assist the students in getting a clear idea about the question paper pattern and types of questions asked in the exam.

1. Which of the following is not true?

(A) Writing is crude representation of spoken language

(B) Writing contributes to the standardization of a language

2. Arrange the following items in a sequence of small to larger units and select the correct answer:

3. The book entitled “A Practical Introduction to Phonetics” is written by

4. A diphthong consists of

(C) A vowel changing in quality

(D) A vowel and a consonant

5. From the articulatory point of view the IPA symbol N indicates a

6. The initial sound of the English word ‘teeth’ is

7. Sounds having open approximation are

8. Assertion I: In stress the laryngeal muscles are active.

Assertion II: In pitch the respiratory muscles are active.

(A) Loss of a phoneme in the word final position.

(B) Loss of a consonant word medially.

(C) Loss of distinction between two phonemes in a particular environment.

10. Consider the plural forms of the English words ‘cat’, ‘dog’ and ‘rose’ and say whether there is the existence of

14. The maxims of conversation in cooperative principles are introduced by

15. Any property or quality connotated by a word, phrase or other symbol, contrasted to actual instances in the real world to which the term applies

16. Based on the componential analysis identify the conceptual meaning of the word “boy”.

(A) Logical structures of Linguistic Theory

(B) Current issues in linguistic theory

(C) Aspects of the theory of syntax

18. Select the correct order of the books according to the year in which they were published.

19. What is the presupposition of the following conversation?

(i) John: Are you able to bring Harry along?

(ii) Peter: That will be splendid. On our way, we shall pick up the drinks.

(A) Both John and Peter know who Harry is.

(B) Both have an idea of the drinks

(C) They have the idea from where to bring them.

(D) They do not know Harry exactly.

20. Read the following conversation by X and Y.

X: My present situation is more of heaven on Earth.

Y: Indeed, but to think that time changes yesterday is amazing.

What conversational maxim is seemingly violated by X and Y?

(B) Maxim of manner

21. Transformational Grammer is the theory of

22. Minimalist programme has ____levels of representation.

23. The participants of the action are called

25. Choose the correct year of publication of the book ‘Aspects of the theory of syntax’.

26. Assertion I: Polysemy refers to cases where a lexeme has more than one meaning.

Assertion II: Chip can mean a piece of wood, a food item or electronic circuit.

27. The linguistic convergence between and among typologically distinct languages is known as

28. The hierarchy of number of speakers recorded for the four dominant families of languages is

29. The official language of Meghalaya is

30. “Nihali” which has some 2000 speakers in the Indian State of Maharashtra is generally regarded as

31. Match the item in List – I with List – II and select the correct answer from the codes given below:

32. Assertion I: All South Asian languages except a few are verb final languages.

33. The MIA geminates (– cc –) were reduced to single consonant;

(A) With compensatory lengthening of the proceeding vowel, with a few exceptions.

(B) Without compensatory lengthening of the proceeding vowel.

(C) With change of the vowel quality.

(D) Without change of the vowel quality.

34. Sound change in which a vowel is fronted under the influence of a following front vowel or glide is known as

35. Match the items in List – I with List – II and select the correct answer from codes given below:

36. In a sound change whereby rearranging of sound or syllables in a word or of words in a sentence takes place is known as

37. Match the items in List – I with List – II and select the correct answer from the codes given below:

d. Assimilation            iv. A phonological process whereby one sound becomes more like a nearby sound

38. Match the items in List – I with List – II and select the correct answer from the codes given below:

39. The term sometimes used for the high prestige variety is

40. Assertion (A): Sociolinguistics is the study of language in relation to society and culture.

Reason (R): Communicative competence and ethnography of communication which belong to sociolinguistics are similar notions.

42. The book ‘verbal behaviour’ was written by B.F. Skinner in the year of

43. Match the items in List – I with List – II and select the correct answer from the codes given below:

44. Match the items in List – I with those in List – II and select the correct answer from the codes given below:

46. When a message engages the addressee directly as illustrated in vocatives, and optatives, it is known as

47. Assertion I: The speech of a single individual is an idiolect.

Assertion II: Any regionally or socially distinct variety of a language is a dialect.

48. Identify the odd one from the following:

50. Match the items in List – I with List – II and select the correct answer from the codes given below:

Year Wise NTA UGC NET Linguistics Solved question Papers from June 2006 till today are given below.

If you have any questions about NTA UGC NET Linguistics Solved Question Papers, please let us know in the comment section.