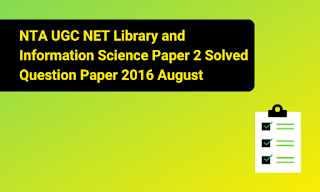 You can boost your preparation by referring to NTA UGC NET Library and Information Science Question Paper 2 2016 August. It will give you information about the important chapters and concepts covered in all chapters.

1. Right to Information Act, in India came into force

2. Who developed the theory of ‘information supply and indexing’ based on five axioms definability, order, sufficient degree of order, predictability and Fidelity?

3. Action for Development through Libraries Programme (ALP) is an initiative of

4. The first edition of ‘Imperial Gazetteer of India’ was published in

5. Inference Engine is a part of

6. The sampling procedure, where the researcher collects data on the few members of the target population, then asks those individuals for information to locate other members of that population whom they know, is known as

7. Identify the ‘FOUR USER TASKS’ with authority data as defined by the Franar working group (FRAD-6)

8. Who adopted ‘one place’ theory in library classification?

9. In which edition “Auxiliary table for area” was introduced?

11. ‘Esprit de Corps’ concept in management is related to

(A) Stability of Tenure

12. A Router is supposed to

(A) Receive a signal and transmits it at high level.

(B) Help you interface with other network.

13. Who expanded Wyers theory in 1960 by characterizing reference service as –Minimum, Middling and Maximum.

14. Scaler chain in the context of Library management-deals with

(B) Scale of performance of staff

(D) A link in the chain procedure

(B) Goode and Hatt

16. Which of the following reference source specifically designed for providing/finding information on astronomical data?

(a) An informal channel

19. Identify the recommendations made by the National Knowledge Commission

(a) Setup a National Commission on Libraries.

(b) Prepare a National Census of All Libraries.

(d) Allocation of 10% budget of total GDP of Government of India for the libraries development.

22. Which of the following were the major events took place in the year 1931 in the history of Library Science?

(a) Publication of first edition of ‘Five Laws of Library Science’.

(b) Publication of first edition of ‘Colon Classification’.

23. Anglo American cataloguing Rules (AACR)-2 is published jointly by the

(a) American Library Association (ALA)

24. Which of the following are associated with the ‘Carrot and stick theory’ of Motivation as described by Frederick Herzberg and his associates?

(a) Use of Rewards

(b) Imposition of Penalties

25. Identify the key attributes of flow charts from the following:

(a) An input and output chart that displays visual representation of the steps involved in a given activity.

(b) Facilitates understanding how a process based on TQM principles works and can bring improvement.

(c) Displays the relationship between two values (i.e. quality of raw material used in a catalogue card affects the life of the card)

(d) An useful mechanism for training employees as to how to use a new procedure.

26. Identify the central leadership competencies/meta-competencies as defined by Ammons Stephens.

27. Identify the image File Format for digital libraries given below:

28. Identify the web 2.0 features from the list given below:

29. Webcasting is concerned with

(a) Distribution of multiple content sources to many viewers/listeners at one go.

(c) Distributed-live or on demand.

30. Arrange the following knowledge classification schemes in their chronological order:

31. Identify the correct sequence of the emergence of the following storage media.

32. Identify the correct sequence of the following steps involved in translation of a document from natural language into classifications language as propounded by SR Ranganathan, under Postulational approach.

33. Arrange the following steps of “The Big 6 model of Information problem solving” as enunciated by Eisenberg and Berkowitz.

(d) Use of Information

40. Assertion (A): Library consortia are just to procure the electronic resources at best price.

Reason (R): A Library consortium is to coordinate activities, share resources, combine expertise, not just procurement of e-resources. UGC INFONET in India can be taken as an example.

41. Assertion (A): Machine translation is not a fully dependable service.

Reason (R): The semantics of language are encoded in algorithms.

42. Assertion (A): The importance of classification for organization of knowledge will continue to persist.

Reason (R): In the electronic era classification have become redundant.

43. Assertion (A): Name of the libraries can claim self-sufficient with respect to their holdings due to spiralling cost of publications.

Reason (R): Spiralling cost of publications and publication deluge still made inter library loan, a necessity for the libraries in the contemporary information age.

44. Assertion (A): The Post Office Protocol (POP) is the main internet standard for Electronic Mail Transmission.

Reason (R): The Post Office Protocol (POP) is a protocol used by local e-mail clients to retrieve email from a remote server over TCP/IP connection.

45. Assertion (A): Boolean Operators using AND, OR, NOT are mostly used in online information Retrieval Systems.

Reason (R): The new age of search engines such as Google do not have the provision for Boolean Search.

Read the passage given below and answer the questions based on your understanding of the passage (Question Nos. 46-50)

Sonification and visualization by sound, has been studied widely for decades and it has also been applied in software for blind people. The aim is to display, for example, graphics, line graphs or even pictures using non-speech sound. By altering the various attributes of sound, for example pitch, volume and waveform, the sound is changed according to its visual counterpart. In the Sound-View application a colored surface could be explored with a pointing device. The idea was that the characteristics of colors, hue, saturation and brightness were mapped into sounds.

In 10 years, over 400 audio games have been developed, which is very small as compared to video games. Researchers could have an important role to play in that expansion process, by contributing to develop innovative features like a more pleasant audio rendering, by projecting audio games in a futuristic point of view by using uncommon technology like GPS for instance and by participate in the elaboration of games which can interest both visually and visually impaired community.

Action games directly refer to games coming from and inspired by arcade games and require a good dexterity of the player. One example of such games is “Tampokme” is such an accessible audio game.

46. Visualization by sound has been used

(B) To display graphics and line graphs through speech

(C) To alter pitch to volume to waveform

47. Development of audio games has

(A) Been as large as video games

(B) No role for researchers

(C) No scope for future development

(D) Scope for use of GPS

48. Which of the following is not a dependency factor for studying audio games?

(B) Interaction mechanisms of timing

49. Some of the attributes of sound used in sonification are

(A) Pitch and hue

(B) Saturation and brightness

50. Action games are derived from and inspired by