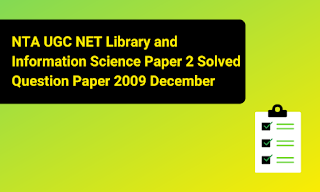 You can boost your preparation by referring to NTA UGC NET Library and Information Science Question Paper 2 2009 December. It will give you information about the important chapters and concepts covered in all chapters.

1. The quotation “Where is the Wisdom, We Lost in Knowledge...” is by

2. Entropy is a measure of

(A) Degree of relevance of information

(B) Quantity of irrelevant information

(C) Degree of uncertainty in information

(D) Degree of certainty in information

3. CONPOLIS (India) was set up in the year

4. First time efforts for the development of libraries in India were made

5. An E-book which does not require an internet connection to access its contents is

7. Who propounded “Conservative, moderate and liberal theories of reference service”?

(A) William A Katz

8. The input Centre for INIS in India is

9. The provision of phase relations in DDC was made available from

(A) Value for money

(B) Performance evaluation based on cost

(D) Performance evaluation based on inputs

12. Which national agency in India is assigning the ISBN?

(C) Federation of Publishers in India

13. The term ‘Cyberspace’ was first used by

(A) Andrew Pollock (B) William Gibson

14. RFID Technology is used in

(A) Acquisition (B) Serial Control

15. The Boolean operator ‘AND’ is related to

(A) Productive (B) Additive

(C) Logical Difference (D) None of the above

16. The process of configuring the disks into tracks and sectors is called

(A) Booting (B) Formatting

(C) Labelling (D) All the above

17. A research design is

(C) A hypothetical statement (D) A controller of variance

(A) Dependent variables (B) Intervening variables

20. ‘Libraries as Gateways to Knowledge’ is the title of the document

21. Assertion (A): INDEST conceived J-Gate as a customized gate for e-journals subscribed by the member libraries.

Reason (R): J-Gate provides a common access platform for all its members to search and share resources subscribed by the member libraries.

22. Assertion (A): XML, just like HTML is a meta language that is capable of containing extendable elements.

23. Assertion (A): Measuring the Internet and in particular the web is a difficult task.

24. Assertion (A): An indexing language is an artificial language as it uses controlled vocabulary.

25. Assertion (A): With large collection of documents, recall can be measured properly.

Reason (R): The proper estimation of maximum recall for a query requires detailed knowledge of all the documents in the collection.

Reason (R): Many fold increase of unfair use of I.P.

27. Assertion (A): Library automation is at a slow pace in Indian Libraries.

28. Assertion (A): The development of Institutional Repositories in India is at a slow pace.

Reason (R): This can be attributed to the non-availability of open source software and lack of interest among the LIS professionals.

29. Assertion (A): Subject gateways offer the users an alternative to ‘Vacuum Cleaner’ type of search engines, such as Google, Infoseek, Alta Vista etc.

31. Public Library Law has already been passed in the following States. Identify the correct chronological order in which they were enacted.

32. Arrange in chronological order the following persons who were associated with computing history:

(i) Enactment of Press and Registration of Books Act

34. Arrange the following layers of OSI model in the sequence in which they function:

35. Arrange the following four quadrants of spiral of scientific method in their logical order :

36. Arrange the following books in order of their publication:

37. Arrange the following bibliographies according to their date of origin:

38. Arrange the following schemes of classification according to their year of origin:

39. Arrange the following principles and canons according to their levels as enunciated by Dr. S. R. Ranganathan :

40. Arrange the following Associations according to their year of formation:

(a) Web Navigation Element (i) Telecommunication

(a) Theory of Knowledge (i) Farmington Plan

Read the passage given below, and answer the questions based on your understanding of the passage:

Rolland Munro describes accountability as an informal giving that is part of everyday conversation, as well as more formal transactions generally involving some sort of documentary artifact (what we archivists refer to as a “record”). He notes that the authors move “between accounts as stories, explanations and reasons for conduct on the one hand and accounts as coded representations, records, often in the form of numbers, on the other hand”. Each of these modes mediates the other in what he refers to as “accountability relationships.” “Distributions of materials and devices are as much as effect of the giving and calling for accounts, as they are integral to the business of producing and consuming accounts”. Records are both intermediaries in the accountability process and evidence of it.

(B) Formal artifacts only

47. The phrase ‘record keeping’ is associated with

(A) Computer programmers (B) Archivists

48. What integral components Munro has identified for accounting in the business?

(A) Records and Codes (B) Documentary archives

(C) Something done continuously (D) All of the above

50. Accountability, which is represented by an artifact, includes