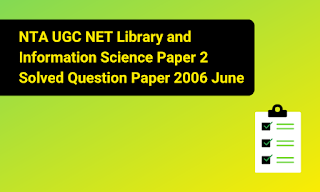 You can boost your preparation by referring to NTA UGC NET Library and Information Science Question Paper 2 2006 June. It will give you information about the important chapters and concepts covered in all chapters.

1. Which among the following is considered as an informal channel of Information Communication?

2. Which one of the following is not correctly matched?
(A) Books in Print - Trade Bibliography

4. Zero Based Budgeting system was propounded by :
(A) Peter Drucker

5. A series of interconnected documents stored on the Internet is called :
(A) Websites

6. The first All India Conference of Librarians in 1918 was held at :
(A) Baroda

7. If two citations are cited together, it is known as :
(A) Double citation

8. Grey Literature means :
(A) The literature published by a publisher named as “Grey Publisher”

(C) The literature published and made available in Grey shades

9. The smallest unit of data in a database is :
(A) Record

10. The term “Bandwidth” refers to :
(A) The amount of data that can be sent through communication media

(B) The amount of data in a multimedia file

(C) The speed of transmission of data

(D) Number of bands available in a computer
Answer: (C)

11. Which of the following factors is not considered in the making of a library budget?
(A) The size of the organization

(B) The type of users

15. Hypothesis is a :
(i) Solution to the problems (ii) Statements of assumption (iii) Statement to be tested (iv) Fact

19. The decision to make or not to make an entry under a subject term is governed by the
(A) Canon of Ascertainability

20. “Span of control” refers to :
(A) The numbers of subordinates to be supervised

(C) Duration over which the control is to be exercised

(D) The area which is to be controlled

21. Assertion (A): Classification as a tool for organization of knowledge will continue to persist.
Reason (R): In the age of e-documents classification is redundant. Codes :
Codes

22. Assertion (A): Collection development should be judiciously done.
Reason (R): Almost all libraries have limited resources.

23. Assertion (A) : No single library connect all the demands of the users
Reason (R) : Resource sharing is the need of the day.

26. The catalogue codes were developed in the order as :

for author and title entries, AACRI

(B) Rules for Dictionary catalogue, ALA Rules for author and title entries, AACRI,

(D) ALA rules for author and title entries, AACRI, Rules for Dictionary catalogue,

27. Which is the correct sequence of the following in the chronological order of publication

29. Select the right chronological sequence of information systems, as per their year of
establishment

30. Select the right sequence of the following devices according to their storage capacity in descending order :

31. Select the right sequence of contribution of classificationists in the chronological order

Read the passage given below, and answer the question based on your understanding of the passage

Stock verification implies the physical check-up of the articles on record. It is a common practice in big business houses and government departments to resort to annual stock-taking in order to assess the profit or loss. They try to find out as to what has been sold out and what has been left behind so that a proper quantity of a particular item may be procured for future sale. There is a practice to differentiate between stock and store articles. More importance is attached to stock articles since these are of permanent value and are likely to remain longer in use whereas the store articles are consumable. An analogous example can be cited by referring to two kinds of leaves i.e. earned and casual leaves allowed to employees. The former can be cumulated whereas the latter cannot be cumulated since it is consumable and lapsable. Naturally, more importance is attached to the former one. Every employee tries to avail of the casual leave first before he requests for earned leave. The similar distinction is made between stock and store or stationery articles. A typewriter is a stock article while a pencil is a store article since the latter is likely to be used up soon. So little importance is attached to the store or stationery articles. The underlying idea behind this differentiation is the awareness of the sense of property which is a gift of the capitalist economy.

46. “Stock verification is a common practice in the following agencies only”. Choose the
correct answer to justify it :

(A) libraries, government offices and hospitals

(B) libraries, government offices and residences

47. “Annual stock taking is usually done in order to assess profit and loss”. Choose the
correct answer to justify it :

(A) The statement is false

(B) The statement is true

(C) The statement is partially true only

(D) None of the above statements are correct
Answer: (A)

48. Choose the correct answer from the following :
(A) Stock articles are consumables

(B) Stock articles remain no longer in use

(C) Stock articles are not permanent

49. Choose the correct answer from the following :
(A) Casual leaves of employees are not consumable

(B) Casual leaves are subject to cumulation

(C) Casual leaves are not subject to cumulation

50. Choose the right answer from the following :
The type writer is a stock article because

(B) Little importance is attached to it ;

(C) It is not a stationary article;