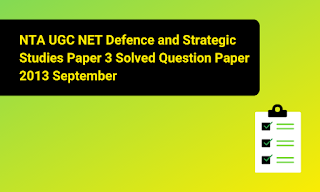 You can boost your preparation by referring to NTA UGC NET Defence and Strategic Studies Paper 3 Question Paper 2013 September. It will give you information about the important chapters and concepts covered in all chapters.

Practicing these NTA UGC NET Defence and Strategic Studies Paper 3 previous year question papers assist the students in getting a clear idea about the question paper pattern and types of questions asked in the exam.

1. Who was the Cartographer who demarcated the borders of India and Pakistan?

2. Arrange in sequence with descending order of shares of arms sales of major arms producing countries.

3. India’s TRI-service command is located at

4. On which river was the Salal Dam Agreement signed between India and Pakistan?

5. Which of the following set of activities encompasses the process of drug trafficking?

(A) Cultivation, manufacture and sale of illegal drugs

(B) Purchase, packing and distribution of illegal drugs

(C) Manufacturing of illegal drugs only

6. Exclusive Economic Zone (EEZ) from its coastline is

7. Panchsheel Agreement was signed between

(A) India and Bangladesh

(B) Pakistan and Afghanistan

8. Who has propounded the Decision making theory?

9. Which one of the following approach is not supported by Liberals?

(A) Balance of Power

10. Which one of the following is not the intangible sources of power of a nation – state?

11. Military operation launched by security forces to flush out Sikh militants from Golden Temple was named as

12. Who was the British Prime Minister, when India got its independence on 15th August, 1947?

13. Which one of the following is not the irredentism?

(A) Kurdish in Iran and Iraq

(B) Nagas in India and Myanmar

(C) Baluch in Iran and Pakistan

(D) Jews in Israel and Germany

14. With which of the following countries does India share its maximum border?

16. Match the type of nuclear weapons with their countries:

17. Identify the correct sequence of N.S.A. in India in a chronological order.

19. In which of the following State is ‘Teen Bigha’ located?

20. Name of TE Laurence is associated with

21. Who was the author of a book titled ‘Untold Story’?

23. Internal conflict between Tamils and Sinhalese communities in Sri Lanka is seen as

24. Which of the following is a landlocked country?

25. Match the following in respect of UN organs and responsibilities:

26. In relation to Intergovernmental organizations mark the correct option.

Assertion (A): War is caused by economic deprivation.

Reason (R): In long run, economic disparities will lessen and war will be eliminated.

28. Identify the following agreements in their descending chronological order and choose the appropriate code:

29. ‘Geronimo’ was the code name given to which of the following individual by US administration?

30. The term ‘War Strategy’ can be defined as

(A) The art of projecting and directing a campaign.

(B) The method by which a commander seeks to bring his enemy to battle.

(C) An art of mobilising and directing the resources to safeguarding and promoting one’s own interests.

(D) It is the science of utilising armed forces.

31. The Indian Space Programme began in the year

33. Which of the following elements does not contribute to the escalation of defence expenditure?

(A) Existence of military-industrial complex

34. Which one of the following is not the IMF goals of structural adjustment programs?

36. Falkland war was fought between

(A) Argentina and Britain

(B) France and Germany

(A) Efforts to end the war

38. Coco Islands, presently under Myanmar is being militarized with the help of

39. Which of the following is the last country to join SAARC?

40. Match the following theorist (List – I) with the theories they propounded (List – II) and choose the appropriate code:

(A) Irregular warfare between nations

(B) Civil war within a nation

42. Which Indian Institution has given a call for opening negotiations on universal treaties and conventions for a total ban on all nuclear tests?

43. “For developing nation, security is development. Without development there can be no security” is a statement attributed to

45. ‘New Moore’ island dispute is between

(A) New technology is incorporated in consideration of likely war.

(B) New technology and doctrine are incorporated in considerations of likely war.

(C) New technology, doctrine and organizations are incorporated in consideration of likely war.

(D) Major powers incorporate all three of them in their policy formulations of likely war.

47. Which one of the following is correct elements of sea power proposed by A.T. Mahan?

48. Problems of ‘Chakma Refugee’ refers to the issue related to

49. ‘Camp David’ accord was a Peace agreement between

50. The concept of collective security implies

(A) Machinery for joint action

(B) Arrangement among nationstates

(C) Principle of ‘one for all and all for one’.

(D) Joint action against an adversary

51. Which one of the following is not the means of Pacific Settlement of disputes?

52. Choose the appropriate code of Assertion and Reason:

Assertion (A): The President of India is only the formal head of the executive.

Reason (R): He has to exercise all his functions in accordance with the advice of the Council of Ministers.

53. Assertion (A): Economic globalization means new ideas and technology are rapidly transmitted to states and individuals around the world.

Reason (R): Under economic globalization, an economic elite will emerge as most powerful, leaving the rest behind.

54. In which year economic liberalization introduced in India?

(A) Ratio between logistic persons and fighting forces

(B) Ratio between weapons and equipments

(C) Ratio between men and material

56. Arrange the following group of battles of W.W. II in chronological descending order:

58. Which is not the part of organic theory of State?

(A) People are not allowed to follow any religion

(B) People following only one religion are allowed to live in the State.

(C) People are forced to follow a particular religion only.

(D) State does not patronise or favour any religion.

60. Which is the major source energy in India?

61. Which of the following State do not have a common border with Pakistan?

62. The main emphasis of the Shimla Agreement of 1972 signed between India and Pakistan was

(B) Both countries will have joint army exercises.

(C) Both countries will solve their disputes bilaterally.

(D) Both countries will have faith in the United Nations.

63. Match the following books (List – I) with their respective authors (List – II) and choose the appropriate code:

64. Match the terrorist groups with their location of operations:

65. Arrange in descending order in respect of length of International border, India sharing with her neighbouring countries:

66. The abbreviation ‘CSCE’ stands for

(B) Conference on Security and Co-operation in Europe

67. Which one of the following is not the limited war?

68. Which of the following country does not share land border with India?

69. Which one of the following has not supported the radicalism/dependent theory?

70. McMahon line is a border demarcation between

Read the following passage and answer the given questions based on your understanding of the passage:

Deterrence is a type of influence. Its purpose is essentially negative i.e. to dissuade an adversary from certain undertakings. It is practiced by threatening to impose punishment. In international relations (as well as in other forms of human interaction) deterrence is an old and widely understood method of influence. Punitive threats have been particularly utilized in the field of diplomacy because relations among States are frequently governed by military factors. In this latter respect, then, deterrence is a type of military policy practiced by governments for the purpose of preventing hostile action by other States. These policies have gained greater currency, more elaborate conceptual development and more explicit military implementation with the advent of nuclear weapons and rapid means of delivery.

71. Deterrence is a kind of

72. Relations between States are normally governed by

73. The essential purpose of deterrence is to

(A) Persuade the adversary

(B) Dissuade the adversary

74. Policy of deterrence gained currency only after the invention of

75. The theory of deterrence is quite old in

The old UGC NET Examination paper-3 in Defence and Strategic Studies are of descriptive type till December 2011.

If you have any questions about NTA UGC NET Defence and Strategic Studies Paper 3 Solved Question Papers, please let us know in the comment section.