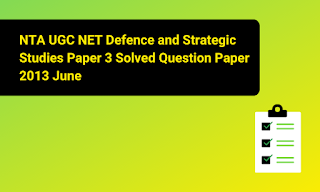 You can boost your preparation by referring to NTA UGC NET Defence and Strategic Studies Paper 3 Question Paper 2013 June. It will give you information about the important chapters and concepts covered in all chapters.

Practicing these NTA UGC NET Defence and Strategic Studies Paper 3 previous year question papers assist the students in getting a clear idea about the question paper pattern and types of questions asked in the exam.

1. Which one is not fundamental element of a State?

2. Match the following in respect of theories and key actors:

3. Match the names of the Army Chief (Table-I) with their respective war fought under their general ship (Table II) and choose the appropriate codes.

4. Bhutan shares international border with which of the following group of countries?

5. Which of the following is symbolic to Sino-Pak nexus?

6. Which Strait on the globe has the maximum flow of oil transport?

(B) Strait of Malacca

7. Assertion (A): Because of globalization the sovereignty principle has been eroding considerably.

Reason (R): The expenditure on fencing of international borders in recent time has been increased enormously.

8. Assertion (A): A State refrains from taking aggressive action using its first strike capability because of the concept of MAD.

Reason (R): If opponent has second strike capability, the deterrence can be successful.

9. Match the Table – I and Table – II related to Major Arms Control Agreements and Years.

10. Assertion (A): Non-alignment still continues to be an option as independent foreign policy of a country.

11. Which of the following statements is not applicable to the traditional concept of National Security?

(B) It emphasizes power in military sense.

(C) It defines security in terms of external threats.

(D) It emphasizes the security of individuals.

12. The four elements of the State are

(A) Population, Territory, Army and Sovereignty

(B) Government, Population, Sovereignty and President

13. Three of the following thinkers belong to a particular school of thought. Identify the person, who is NOT in this group.

15. Match the following events (Table-I) with the year of their occurrence (Table-II) and choose the appropriate code.

17. “The desert was tactician’s paradise but Quartermaster’s hell.” Relate the statement with the concerned military campaign:

(A) The Burmese Campaign

(B) The Battle of Kasserine Pass

19. Choose the appropriate code for the following treaties in their ascending chronological order.

20. Match the following Military Commanders with their respective battles/war:

21. Match the following boundary lines with their respective countries:

23. Match the following Table I & Table II in respect of International Political Economy.

24. Assertion (A): The fall in oil prices in 2009 severely affected the revenue of the Middle East oil producers.

Reason (R): It is because of increase in oil revenue of Iraq and Oman.

25. Choose the appropriate code of Assertion (A) and Reason (R).

Assertion (A): Indian Constitution is the largest and most detailed Constitutional document produced in the world.

Reason (R): It includes even provisions relating to administrative details.

27. Mark the correct answer for shares of population in regions of world, in descending order.

28. Who of the following opined the concept of Naval Power?

30. Assumptions of Collective Security are

I. Wars are prevented by restraint of military action.

II. The aggressor is not always wrong.

III. The aggressor is not easily identified.

IV. Aggressor must be stopped.

(D) Only III is correct.

32. Match the following agency (Table I) with their respective country (Table II) and choose the appropriate code.

34. In context to continental strategy, indicate the Autonomous Region of China

35. Which of the following is not the member of SAARC?

36. Which one of the following location is known for Organized Crime and Narco Terrorism?

(A) Gulf of Mannar

37. ‘Commonwealth’ group of countries refers to

(A) Countries with Neutral Policies

38. In which of the following countries Hamban Totta Port is located?

39. “Joint Working Group” was created during visit of which Indian Prime Minister to China?

(A) Conversion of black money into white money

41. Which of the following is not part of Comprehensive security?

42. Which of the following is not an element of conflict prevention technique?

43. Which of the following is the main aim of “Pug-wash Conference”?

(A) Freedom from Racial discrimination

44. Which of the following is the prerequisite for formal relation between two sovereign independent countries?

45. For restructuring of UNO following are important:

I. State must renew their commitment to provide leadership.

III. Reforms must be occurred.

IV. Member States should look at a reflection of their own policies.

(B) Only I and IV are correct.

(D) Only III and IV are correct.

46. Assertion (A): The driving force in NAFTA is not political elites but multinational corporations.

Reason (R): The social, political and security dimensions we saw in European Union are absent from NAFTA.

47. Which one of the following is not the goal of the IMF structural adjustment programmes?

(A) Restructure and diversify productive base of economy.

(C) Create a base for inflationary growth.

48. International Boundary between India and Pakistan is known as

49. The most famous component of the communication theory in International Politics is

50. Kautilya’s Arthasastra was found in1905 by which of the following scholar?

51. Piracy is rampant in Ocean areas of

52. Triadic structure of conflict analysis was propounded by

54. Which among the following is India’s first indigenously developed missile?

55. The Atomic reactor of Japan which was destroyed in 2011 Tsunami was

56. ‘Aung San Su Ki’ is leader of Democratic movement in which of the following country?

57. The Cease-fire Line between India and Pakistan after 1971 Indo-Pak war is called as

58. Which ethnic group in Ladakh survives on “Pastoral Economy”?

59. Assertion (A): The GATT supports the trade liberalization, since trade is the engine for growth and economic development.

Reason (R): Because use of tariffs as devices for protecting foreign markets.

60. Instrument of Surrender after 1971Bangladesh War, was signed between

61. Who is currently the National Security Adviser of India?

62. Which one of the following are not the assumptions of deterrence theory?

(A) The threat of destruction from warfare is large.

(B) Decision-makers are not rational.

(C) Alternatives to war are available.

63. Choose the appropriate code for the Assertion (A) and Reason (R) as given below:

Assertion (A): National Security means the ability of a nation-state to protect its values from external threats, no matter what form the later may take or what quarter they may appear from.

Reason (R): The danger to national security lies in the ‘hidden hand’ and not in the ‘foreign hand’.

(B) The Kashmir Valley

65. Identify the correct sequence of Army Chief of India in chronological order.

66. Who among the following is associated with the development of Neo-Realist Theory?

67. Which of the following country has adopted terrorism as a tool of its foreign policy?

68. Which of the following is known as Chemical weapon?

69. Treaty of Versailles was signed in the year

70. ‘Tulagma’ Tactics was introduced in India by

Read the passage given below and answer the questions that follow based on your understanding of the passage.

Mahatma Gandhi understood the true nature of nuclear weapons when he said that “Those nations who have atom bombs are feared even by their friends”. From the very beginning, nuclear weapons were instruments of terror and were used for coercion. Security with nuclear weapons is achieved through creation of insecurity in the minds of other States. This is obviously a fragile basis for establishing peace and security. But the problem is that if one State possesses nuclear, the only option for other countries to defend themselves against the threat of such weapons to acquire similar weaponry to deter possible use. Mahatma Gandhi, with his deeper understanding of human nature and affairs of men and states, had recognized from the very beginning that the atom bomb played a political role. Contrary to what might have been expected of the apostle of peace, he did not react for months, at least publicly, to the use of the atom bomb in Japan. However, his concern about its nature, especially as a horrendous weapon of mass destruction, was intense. He was to later describe it as a diabolical instrument of violence. But for months after the bombs were dropped on Hiroshima and Nagasaki, he kept silent because his concern was about the possible “use” of the atomic bomb to deny India its independence. It was only after the commitment to India’s independence became unambiguous that he came out against the bomb publicly.

71. Nuclear weapons are the instruments of

72. Mahatma Gandhi had recognized that the atom bomb played

73. Which one of the following is a diabolical instrument of violence?

74. Mahatma Gandhi came out against the bomb publicly

(A) Before India’s Independence

(B) After India’s Independence

(C) After the commitment to India’s independence

75. The central message of the above passage is

(A) Nuclear weapons are the instrument of peace.

(B) Nuclear weapons are the instrument of deterrence.

(C) Nuclear weapons is the instrument of faith.

(D) Nuclear weapons are the instrument of terror.

The old UGC NET Examination paper-3 in Defence and Strategic Studies are of descriptive type till December 2011.

If you have any questions about NTA UGC NET Defence and Strategic Studies Paper 3 Solved Question Papers, please let us know in the comment section.