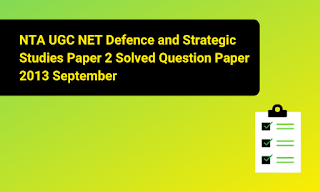 You can boost your preparation by referring to NTA UGC NET Defence and Strategic Studies Question Paper 2 2013 September. It will give you information about the important chapters and concepts covered in all chapters.

1. Cabinet Committee on security is presided by

(D) Capital of a state

3. Officer Training Academy is located at

4. Identify the correct descending order in respect of ethnic population in the Jafana province of Sri Lanka.

5. “Universal Declaration of Human Rights” was adopted by U.N.O. on

6. Identify the correct sequence of induction of following ships in Indian Navy in chronological order:

8. Mark the correct sequence of world regions in descending order in respect of per capita CO2 emissions

(A) Ethnic Vietnamese settled in Cambodia

(D) Buddhist inhabitants of Chittagong Hill Tracts in Bangladesh who fled to India.

11. Arrange the sequence of wars in India in chronological order.

12. How many countries emerged out of disintegration of USSR?

14. “Who so ever rules the ocean, will rule the world” was propounded by

15. The difference between a nuclear reactor and atomic bomb is that

(B) The chain reaction in nuclear reactor is controlled.

(C) The chain reaction in nuclear reactor is not controlled.

16. Bandung Conference refers to meeting of which group of countries?

17. Karbi Aunglong is a militant organisation operating in

(A) Assam and Meghalaya

(B) Mizoram and Tripura

(A) A preliminary report of Government proposals for discussions.

(B) The complete freedom to take action on a particular issue.

19. The instrument used in seeing objects on the surface of sea from submarine is known as

20. Which one of the International Organization proposed at Bretton Woods, was never created?

21. Who was the chief architect of India’s Nuclear Development Programme?

22. “We will wage a thousand years war against India”, is a statement related to

23. Choose the appropriate code of Assertion and Reason:

Assertion (A): Revolutionary Movement failed to make any big dent in British hold over India.

24. Which one of the following is known as biological agent used in war?

(A) Logistic supply from raw material to finished goods at the place of user.

(B) Logistic supply from industry to place of demand.

(A) IPKF assistance in Sri Lanka

(B) NSG anti-terrorist operation in Punjab

27. Which one of the following is not the goal of terrorism?

28. Détente in US-USSR relations did not imply

(A) elimination of all differences between them on international issues.

(B) a limited understanding for cooperation for containing China.

(C) the realisation of the dangers of the uncontrolled race of nuclear and strategic weapons.

29. “Smiling Buddha” was the code name of

30. Nuremberg Trial is associated with

(A) Water treated with chlorine

(B) Water which does not form lather easily with soap

(D) Water used as a moderator in nuclear reactors.

32. Which of the following two countries does the Karakoram Highway connect?

(A) India and Nepal

(B) China and Nepal

33. Identify the correct sequence of Publication of following Books in chronological order:

35. Assertion (A): Economic Globalization across the world is heavily concentrated among few key economies.

36. Match the following concepts (List – I) with their respective security concern (List – II) and choose the appropriate

37. Identify the correct sequence of Induction in Air Force of following aircrafts in their chronological order:

40. Match the following Aircraft (List – I) with the countries of their origin (List – II) and choose the appropriate code.

41. Choose the appropriate code for the Assertion (A) and Reason (R) as given below:

Assertion (A): It is a fact that cross border terrorism is an externally inspired phenomenon but it is also a fact that this phenomenon gets internal assistance and motivation.

42. Who was the commander of the 7th Brigade in the Sino-Indian conflict of 1962?

43. ‘Atom for Peace’ concept was propounded by

44. “Collective Security of Asia” concept was initiated by

47. Arrange the following Oceans in terms of area in the ascending order:

49. The event which triggered the beginning of the first World War was

(A) Austria’s declaration of war on Serbia

(B) Germany’s invasion of neutral Belgium

50. Indira Gandhi Peace Prize for year 2009 was awarded to