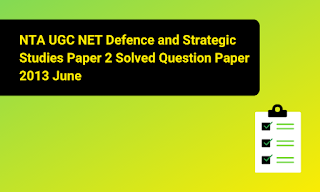 You can boost your preparation by referring to NTA UGC NET Defence and Strategic Studies Question Paper 2 2013 June. It will give you information about the important chapters and concepts covered in all chapters.

1. Clausewitz is associated with which of the following statements?

(A) War is desirable but periodically.

(B) War stems from economic necessity.

(C) War is a continuation of policy by other means.

(D) War indicates the direction of the politics.

2. Assertion (A): As per realist theory, State exists in an anarchic international system, characterised by the absence of an authoritative hierarchy.

Reason (R): States in international system can rely only on themselves.

3. Assertion (A): The Nation-State is the foundation for national self-determination.

5. Which one of the following is not the Pakistani nuclear missile?

7. Which one of the following is not the means of Coercive settlement of disputes?

8. Match the following missiles with their respective countries.

9. The United Nations’ Organisation (UNO) declared the Indian Ocean as a Zone of Peace in

10. During World War II the important event that took place on 7thDecember, 1941 was when

(B) Britain and France declared war on Germany.

(D) A second front was launched by the Allied Powers.

11. ‘Durand Line’ is a border demarcation between

12. Treaty of Westphalia mainly deals with

(B) Principle of Sovereignty

13. Choose the appropriate code for the Assertion (A) and Reason (R) as given below:

Assertion (A): The national security perception of a nation-state is the product of interaction of security awareness and suggestive nature of its citizen and information gathering mechanism of the government.

Reason (R): The common citizen of India, by and large, lack security awareness and think that it is the responsibility of the government to look after the process of national security.

14. Assertion (A): NGOs are primary actors at the grass root level in mobilizing individuals to act.

Reason (R): NGOs played a key role at Rio Conference of 1992 on environment and development.

15. ‘Parcel Island’, dispute is between which of the following countries?

16. Which of the following security force is deployed on Sino-Indian border?

17. Which of the following is not a principle of war?

18. Kautilya’s Arthashastra is often compared to

(A) Machiavelli’s “The Prince”

(B) Adam Smith’s “Wealth of Nation”

19. Incident 26/11 denotes the terrorist attack on

20. Match the following Personalities (Table I) with their weapons with which they are associated (Table II) and choose the appropriate code.

21. Which one of the following organization originated from GATT?

23. Which of the following is not the organ of UNO?

(B) International Court of Justice

25. Tashkent Agreement between India and Pakistan was signed in the year

26. Where is ‘Diego Garcia located?

27. “String of Pearl” is concept of Naval Encirclement propounded by _____.

28. Which of the following is pertinent to China’s nuclear-weapon test site?

29. Which of the following country is not a member of ASEAN Group?

30. Which of the following country is not a member of Commonwealth Nation?

31. Which one of former Soviet Union independent State is a fragmented State?

32. Car Nicobar Island is located in

33. Sino-Pak Nexus is pertaining to

(A) Rann of Kutch

34. Match the following battles theatre (Table I) with a particular war (Table II) and choose the appropriate code.

35. The basic cause of break-up of Soviet Union was

36. ‘Ichogil Canal’ is a man-made waterways located at

37. Which of the following is not taken as the instrument of National Security?

38. The AGNI Missile of India could be specified as

40. Which of the following is one of the integral components of Confidence Building Measures?

(B) Absence of inimical postures and prevalence of transparency in relations

(D) Stable security as a condition for confidence building

41. What are the causes of rise of fundamentalism in Afghanistan?

43. Which one of the following oceans was known as the British Lake?

45. Which one of the following is not a land-locked State?

46. India’s Continental Strategy is linked with

(B) Indo-Pak and Sino-Indian Border disputes

47. Who amongst the following was the first Field Marshal in India?

48. Which of the following is not an element of a Nation State?

49. Neutrality is a condition that can exist only in times of

50. Propaganda is an essential element of