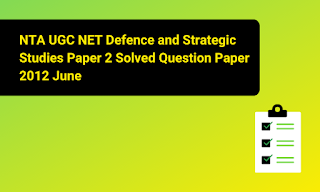 You can boost your preparation by referring to NTA UGC NET Defence and Strategic Studies Question Paper 2 2012 June. It will give you information about the important chapters and concepts covered in all chapters.

1. Who opined that “if you wish for peace, understand war”?

2. Who is among the following known as ‘Father of India’s Missile Programme’?

3. Which one of the following is not taken as the instrument of National Security?

4. Who argued that “the central theme of international relations is not evil, but tragedy”?

5. ‘Security Dilemma’ of States continues, due to the following reasons:

(A) Military power always appears offensive to others.

(C) States do not take steps to use force.

6. Who argued that “Geo-politics is a pseudo-science”?

7. Who among the following propounded the Organic Theory of State?

8. During the cold war years, key to world peace was insured by

(B) Balance of Power and Collective Security Mechanisms

9. Who propounded the concept of ‘Geographical Pivot of History’?

10. Rise of fundamentalism in Afghanistan is largely due to

(B) Religious extremism of Islam

11. Where is Diego Garcia island situated?

12. Which one of the following is not implied in the assumptions of Deterrence Theory?

(A) Decision-makers are rational.

(B) The treat of destruction from warfare is large.

(C) Alternatives to war are available.

(D) Open economy can defuse the threat of war.

13. Which one of the following is not an arms control agreement?

14. Which one of the following is not an element of National Power of a modern nation-state?

15. After Tsunami-induced problems in Japan’s Fukushima Nuclear Plant, which one of the following countries has not stopped the expansion of nuclear power for peaceful purposes?

16. Which of the following is not the consequence of the Indo-US Civilian Nuclear Deal?

(A) US support for India’s emergence as a potential super power.

(B) Separation of India’s civil and defence nuclear facilities.

17. The military operation launched by independent India to liberate Hyderabad from Nizam’s rule in September 1948 was named as

18. ‘Armed Forces Special Powers Act’ was enacted by India in the following year:

19. The terms ‘Golden Crescent’ and ‘Golden Triangle’ are related to:

(B) Proliferation of small arms

(D) All of the above activities of organised crime

20. ‘Operation Jeronimo’ is related to:

(A) Killing of Osama Bin Laden in Pakistan

(B) Killing of Col. M. Gaddafi

21. ‘Missile for Nuke’ programme is referred to:

(B) Missile technology transfer by China to Pakistan.

(C) Reduction in inter-continental Ballistic Missiles by USA and USSR.

22. Which one of the following is located in South China Sea?

23. Swat Valley is situated in the area of:

24. ‘Jasmine Revolution’ is related to:

25. Which one of the following is not a member country of SAARC?

26. Match the following on the basis of List – I and List – II. Use the codes given below:

27. Match the military thinkers with their respective domain of doctrines on the basis of following List – I and List – II:

31. Choose the correct code of Assertion and Reason:

Assertion (A) : The concept that ‘one man’s terrorist as another’s freedom fighter’ must be made unacceptable’. Reason (R) : Terrorists survive due to significant support from outside.

32. Choose the appropriate code of Assertion and Reason.

Assertion (A) : Terrorism is not a purposeless violence. It is not like nature act of earthquake or tsunami before which we are helpless.

Reason (R) : Terrorists and those who support them have specific goals; terrorist violence is the means to attain those goals.

33. Choose the appropriate code of Assertion and Reason.

Assertion (A) : Today National Security means the ability of a nation to protect its internal values from external threats, no matter what form the latter may take or what quarter they appear from.

Reason (R): The danger lies in the “hidden hand” and not the “foreign hand”.

34. Choose the appropriate code of Assertion and Reason.

Assertion (A) : The United Nations will continue to expand its duties and powers.

Reason (R) : UN intervention cannot be justified when a government falls into anarchy and civil war.

35. Choose the appropriate code of Assertion and Reason.

Assertion (A) : Population pressures and increased per capita consumption of resources have made water a natural resource issue of 21st century.

Reason (R) : Today fresh water on the planet earth is only three percent.

36. Identify the correct sequence of the following thinkers as per their period in history in chronological order:

37. Identify the correct sequence of the following India’s Defence Ministers in terms of their tenures in chronological order :

38. Identify the following events in a chronological order :

39. Which one of the following is in correct chronological order in terms of their inception:

40. Identify the following wars in the order they were fought :

41. Identify the correct chronological order of the following military thinkers:

(B) Treaty of Tlatelolco – NPT – Treaty of Rerotonga – CTBT

44. Choose the appropriate code of Assertion and Reason.

Assertion (A) : Security essentially implies the absence of real, potential or perceived threats and challenges whether stemming from external or internal sources.

Reason (R) : The threat perceptions are largely diverse to preclude a common approach.

45. Choose the right code of Assertion and Reason.

Assertion (A) : Pakistan has been advocating the necessity of strategic depth in Afghanistan to hide its territorial ambitions and its aim of expanding its strategic frontiers towards Western and Central Asian regions.

Reason (R) : Secure Western borders and a subservient Afghanistan will enable Pakistan to deploy most of its armed forces against India.

46. Which group of the following countries comprise the “Golden Triangle’?

(A) Peaceful change of government by voting

(B) Voluntary resignation of the Head of a State.

(C) Change of government by a judicial decision.

(D) Sudden overthrowing of a government by Military.

48. Which one of the following is not considered as fundamental objective of National Security?

(A) To preserve national sovereignty.

(B) To protect territorial integrity.

49. Who was the Chairman of Kargil Review Committee?