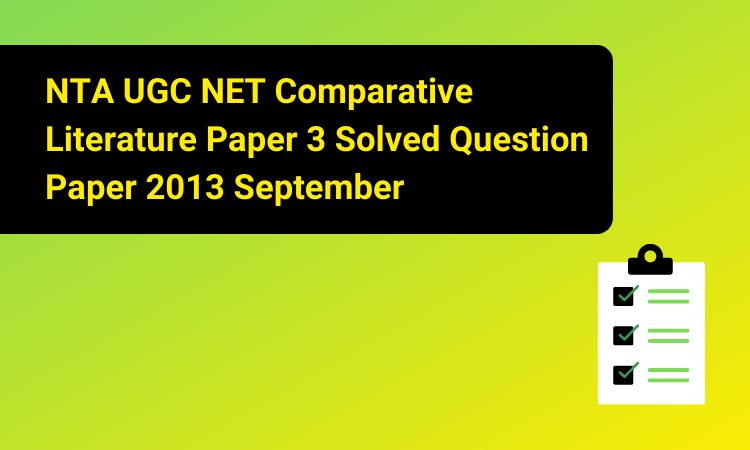 You can boost your preparation by referring to NTA UGC NET Comparative Literature Paper 3 Question Paper 2013 September. It will give you information about the important chapters and concepts covered in all chapters.

1. Which of the following works does not address the theme of ‘The Fall of Man’?

(B) Kyd’s The Spanish Tragedy

2. The 17th century collection of French fables which facilitated the migration of tales to a large extent were written by

3. The following book argues that growth in literary criticism and the interest in institutionalizing literary education are closely interrelated:

(A) Is there a text in this class?

(B) The Anxiety of Influence

(A) the prestige attached to a particular work of art, or any commodity, in a socio-cultural milieu

(B) the prestige attached to capitalist culture in a sociocultural milieu

5. The following could constitute legitimate objects of enquiry within cultural studies

The correct combination according to the code:

(C) All of the above

6. Arrange the following in chronological order:

iv. The traditional date for the fall of Troy

7. Grouped below are languages that share socio-historical and cultural traditions of India, Bangladesh and Pakistan. Identify the group to which languages with this shared history belong:

8. Which of the following argues for an open embrace of and sympathy for, linguistic aliens and minorities?

(A) Monolingualism of the Other

(B) Strangers to Ourselves

9. Which of the following statements on Vande Matram is/are not true?

1. Its opening passage is an invocation of fertility, beauty and benignity.

2. It code switches from Sanskrit to Bangla and back.

3. It is the battle chant of the Hindu army in Bankim Chandra’s novel.

4. It is a lyric Bankim Chandra wrote at the ascension of George V to the throne of England.

5. It became popular as a great revolutionary hymn during India’s struggle for independence.

10. Identify the author of Literary into Cultural Studies from the following:

12. Identify the writer of The Joys of Motherhood.

13. On the question of cultural production of meaning, this text highlighted how different class cultures might in fact share sources, such as John Bunyan’s Pilgrim’s Progress, yet make radically opposed meanings of those works in arriving at a consciousness of one’s relational position in society. The text in question is

(A) The Uses of Literacy

(B) The Making of English Working Class

14. Which of the following art styles does not belong to the classical group?

15. All except one of the following films incorporate the experience of the partition in their plots. Identify the exception.

16. An artist, very crucial to an understanding of narrative forms in the eighteenth-century English culture, engraved the contemporary English society in a series of scenes called

(B) The Pilgrim’s Progress

18. Nietzsche’s Thus Spake Zarcthwstra was interpreted in music by

19. Identify the common factor which binds these three characters – Noah, Utnapishtim and Deucalion.

(A) They fought for the independence of their country.

(B) They built boats to save the lives of God’s creations.

(C) They spread Christianity in their homelands.

(D) They were all turned into beasts.

20. The concept of a ‘Literary History from Below’ was first enunciated by which of the following scholar?

21. The term ‘Mosaic’ is used to describe the cultural framework of

23. Dialectic of Enlightenment was written by

(A) Jean Baudrillard and Max Horkheimer

(B) Max Horkheimer and Theodor Adorno

24. Listed below are 4 Indian journals. One of them was devoted to translation and translation studies.

25. It is argued that Indian literature is neither “one” nor “many” but rather a systemic whole, by

26. Which of the following languages was not covered in Comparative Indian Literature, edited by K.M. George and published in 1984?

27. Name the theoretician who, in the 1920s, described Comparative Literature as a bogus term that made neither sense nor syntax.

28. Who among the persons listed below is not an indigenous story teller?

(A) a short story written by George Orwell

(B) an essay written by Michel de Montaigue

30. “Peshwar Express” is a short story by

31. Among other things, Comparative Literature is a branch of literary history and it is, like all historical disciplines, faced with the thankless task of bringing order to the seeming chaos of ceaselessly unfolding and constantly flowing events. Who commented this?

32. Which of the following works is not literature proper and is more of a political treatise?

(A) War and Peace

(B) Crime and Punishment

(D) The Agony and the Ecstasy

33. The first Japanese writer to win the Nobel Prize for literature was

34. Death in Venice is written by

(A) Agatha Christie in English

(B) Machiavelli in Italian

35. The Wretched of the Earth is a book by

36. Which of the following is associated with Translation Studies?

37. Which of the following texts argues that untouchability has its roots in internal social discrimination in India and not in racial difference, as had been argued by Stanley Rice, a sociologist?

(A) “Can the Subaltern Speak?”

(D) Untouchables: Who were they?

38. “Comparative Literature in India” the landmark essay published in the Yearbook of Comparative and General Literature (YCGL) was written by

39. The first modern phase of Hindi literature is held to be the

40. How many Prakrits are prescribed in “Natyashastra”?

41. In Brecht’s Der Kaukasische Kreidekreis, the most important message is contained in the

42. Who among the following do you associate with the concepts of formal and dynamic equivalence?

43. Which writer’s Nobel Prize Address makes a reference to both Antonio Pigafetta and William Faulkner?

44. The journal of the Comparative Literature Association of India is called

(A) Literature and Literary Studies

(B) Literary and Cultural Studies

(i) abolishing English studies in India

(ii) a rationale of English studies in India

(iv) strengthening the teaching of the English language in India

46. Which of the bodies mentioned below was one of the two organizations that merged to form the Comparative Literature Association of India (CLAI)?

47. Namdeo Dhasal’s poetry has been translated most recently into Bengali by

48. In the essay “Present Tasks of Comparative Literature” Meltzl emphasizes on the idea of

(C) The principle of polyglottism

49. Identify the text which is not adapted from Mahabharata.

(A) an epic poem written in Greek

(B) an epic poem written in Latin

51. Who among the following was not one of the contributors to Aspects of Comparative Literature: Current Approaches, edited by Chandra Mohan and published in 1989?

52. Which of the following constitutes one of the periods of literary history demarcated by Sisir Kumar Das in his A History of Indian Literature?

53. That the notion of fidelity in translation was not an essential one for the Indian context before colonial contact, was argued by

54. Lacan has been influential on

55. The tradition of Revenge Tragedy was introduced in Europe by

56. Identify the writer who says: “I think Comparative Literature, which is not different from the study of single literatures so far as the critical methodology is concerned, but differs only in matter and attitude, can play a vital role in the reorganization of our literature faculties and in the teaching of literature.”

58. “Triumph and Tragedy” is one of the sections of the following book:

(B) A History of Indian Literature

59. Prithviraj Raso ascribed to Chand Bardai is composed in

60. Hayden White says: “… a specifically historical inquiry is born less of the necessity to establish that certain events occurred than of the desire to determine what certain events might mean for a given group, society, or culture’s conception of its present tasks and future prospects.” Here, White reconceptualises historical process to include the

(A) importance of validation of historical events

(B) application of archival procedures to past occurrences

(A) domesticates all culture – specific markers into English

(B) retains many culture-specific markers and provides detailed annotations

(C) retains culture-specific markers, but neither annotates them nor signposts them by italicising

(D) retains culture-specific markers, italicises them, but does not provide any connotations

62. Of primary importance to Aristotle’s understanding of tragedy is the play

64. Kiratarjuna according to the Sashtras, is designated as

65. Assertion (A): The erosion of national boundaries in the sphere of literary production may serve as a Utopian project of encouraging transnational solidarity and exchange.

Reason (R): It can be deployed to disguise, in processes of cultural imperialism, the residual asymmetries embedded in neo-colonial structures of politics, economics and international power.

66. Post Colonial Translation: Theory and Practice has been jointly edited by

67. The play by Vijay Tendulkar that is modelled on a real-life incident in the world of the media is

68. The following theoreticians have been particularly critical of thematology:

(C) All of the above

69. In Manto’s short story “Khol do”, the name of one of the characters is

70. Which of the following has little, if any, theoretical efficacy as a contentcategory?

71. Identify the writer of Kafka on the Shore.

72. In which of these books did Gurbhagat Singh’s “Comparative Literature: Towards a Non-

(A) Aspects of Comparative Literature

(B) Comparative Literature in the Age of Globalization

73. W.H. Auden’s “Musée des Beaux Arts” uses a cluster of images from Bruegel’s paintings. While the poem explicitly mentions his “Fall of Icarus” some other references to his works include:

II. The Massacre of the Innocents

III. The Numbering at Bethlehem

IV. The Procession to Calvary

The correct combination according to the code is:

74. In 1798 Wordsworth and Coleridge jointly published The Lyrical Ballads. The same year saw the publication of another such joint venture in Europe. The contributors to this anthology were

(A) Lamartine and Musset

(B) Goethe and Schiller

75. Who among the following Indian scholars is reputed to have contemplated a literary history of/for India in at least two of his major books?