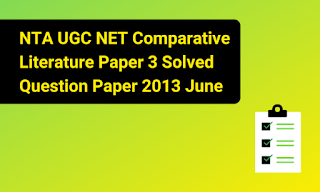 You can boost your preparation by referring to NTA UGC NET Comparative Literature Paper 3 Question Paper 2013 June. It will give you information about the important chapters and concepts covered in all chapters.

1. The first systematic application of the theory of patriarchy to literary studies was made by

2. Walter Benjamin’s “The Task of the Translator” was initially written as an introduction to an anthology of translations of poems by

3. ‘Rasa’ is an amalgamation of

4. With which genre would you associate the poem “The apparition of these faces in the crowd; Petals on a wet, black bough”?

5. Kappanna and Appanna are characters in which of these modern Indian plays?

6. Arrange the following books in order in which they appeared. Use the code given below:

7. Name the author of the influential essay, “From Comparative Literature to Translation Studies”.

8. Which of the following is not a report on the scope, status and standards of Comparative Literature?

9. The Howe Past Midnight is an English translation of Tamil writer Salma’s works done by

10. Which of these methods deal/(s) primarily with categories related to content?

11. A key theory in translation studies that challenges the hegemony of the source language and locates the translation firmly in the context of the target language space instead, is the

12. Homeric epithet is a combination of

(A) Adjective and Noun

(B) Romeo and Juliet

14. Gargantua and Pantagruel is

(A) Written by Montaigne during the medieval period in France

(B) Written by Rabelais during French Renaissance

(C) Written by Villon during early Renaissance in France

15. The tripartite division of translation into ‘metaphases’, ‘paraphrase’ and ‘imitation’ was introduced by

16. Which of the following languages was not covered by the original four volumes of the National Bibliography of Indian Literature 1901-1953 published by the Sahitya Akademi, but was part of the fifth volume, which was envisaged and added later to the series?

17. Identify the author who is a double migrant:

18. The philosopher whose deconstructionist critique of problems of origins, essence and presence caught the attention of critics who had grown disenchanted with New Criticism and structuralism, was

19. Bakhtin proposes the notion of

(B) Zones of characters

20. Name the translator who infamously stated that the Persian poets he translated were not poets enough until he made them so

21. Which of the following is one of the definitive characteristics of the French School of Comparative Literature?

22. The common element is early Bangla and Ahamiya literature is

(A) A parody of Whitman’s themes

(B) A caricature of Whitman’s persona

(C) A tribute to Whitman’s clairvoyance

(D) A parody of Whitman’s style

24. Which of the following is, in sum, Paul de Man’s thesis in such books as Blindness & Insight and Allegories of Reading?

(A) In all things that speech can express, these are two elements – the outward or instrumental and the real or spiritual.

(B) What literature “knows” is that knowledge is a paretic, that is, unavailable, because it is subject to a double bind. We cannot have access to the truth that we seek in literature; and this is literature’s truth.

(C) Canonical works take the measure of the reader by means of their authority; their capacity to rebuke, baffles, and thwart us, as well as surprise us with unexpected, astonishing power. Even at its most frustrating, the canonical work draws us on; in our fascination, we remain loyal to it.

(D) In the struggle for the allegiance of the reading public, the established poetics can point to prestigious finished products whereas the adherents of the new poetics cannot yet do so. Consequently, the challenges being to import their own ‘finished products’.

25. “From country to popular” is the subtitle of a volume of which series on Indian Literary history?

(A) A History of Indian Literature

(B) The Oral Tradition in India

(D) India: Her Literature and Culture

(i) A cluster of stars

(iii) A group of seven Alexandrian poets and tragedians.

27. Who is the author of Dhvanyaloka?

28. Novels that breach the template are held by reception aesthetics to be

(B) Extending the horizon of expectation

29. Miss Leela Benare is the protagonist of which of these plays?

(D) Silence! The Court is in Session

31. Name the 1958 work that applied structuralist and semi logical methods to a range of non-literary texts such as wrestling, food and fashion

(B) The Pleasure of the Text

32. The European poet who compared his own poetic style with that of Pinder in the lines “Julus, whoever rivals Pindar……” was

33. The Loeb Classical Library is known to provide comparative literary scholars with __________.

(A) Original classics in unexpurgated format

(B) Literary translations of classics

(D) Original classics, edited, with notes and lists of sources

34. Identify the Booker Prize awardee from the list below, who was not born in India.

(i) Is considered by many as the first Oriya play.

(ii) Has been translated into English as The Holy Man.

(iv) Has several characters who speak Bangla, Hindi and English.

36. Uttararamacaritam was a famous play of

37. The name of Faulkner’s novel The Sound and the Fury has been taken from

(A) A collection of religious sayings

(B) A collection of myths

(C) A collection of parables

(D) A collection of poems on ancient European civilization

39. Identify the book which does not fall under the category of diasporic literature

(A) Can you hear the Night bird call?

(B) The Oath of the Vayuputras

(D) The Sorrow and the Terror

40. Identify the one which is not a historical novel:

(B) The Hunchback of Notre Dame

42. Aayatollah Khomeini had declared a ‘fatwa’ on

(A) Arundhati Ray for “God of Small Things”

(B) Salman Rushdie for Midnight’s Children

43. The Cherry Orchard was written by

(A) Moliere in French

(B) Chekhov in Russian

44. Who declared that the “unconscious is structured like a language”?

45. The greatest theorist of tragicomedy was

46. “Translation as Perjury” is an essay by

47. Counterpoints is written by

48. Jean-Paul Sartre’s The Flies borrows its theme from

49. The first department of comparative literature was started at

50. Which of the following writers is not a Nobel Laureate?

51. “Why Comparative Indian Literature?” is an essay by

52. Who among the following cannot be subsumed under the category, American Transcendentalists?

53. Friedrich Schlegel was a major figure of

(C) The Storm and Drang Movement

54. The English Novel Rajmohan’s wife was written by

56. The Hindi film Utsav was based on

57. _________ is the study of the discursive content of images, the symbolic meanings that they express.

58. Which early European poet used the AZP structure of the ballet to formulate his stanzaic pattern?

59. Satyajit Ray’s award winning film “Pather Panchali” is based on a novel by

60. Which of the following reports engages most clearly with the emergence of Cultural studies?

61. Culture Studies as an academic discipline began in the UK at the

(A) University of London

(B) University of Birmingham

62. Name the author of the novel Kartography

63. Who among the following devised a “pointillist” method in Art history?

64. The following poems furnish good examples of the artistic potential of emphasis:

I. “The Lady of Shallot”

(C) III and IV are correct

(D) II and IV are correct

65. Principles of Art History was written by

66. Which of these books were published in two different editions separated by many years, the first in black and white, and the second in colour, where the racism in the former was sought to be removed by the author in the latter?

(A) Tintin in Africa

(B) Tintin in America

(C) Tintin in the Congo

(D) Tintin and the Broken Ear

i. The politics of representations         1. Richard Hoggart

68. The ‘Inuits’ are commonly known as

69. An autobiographical graphic novel by Marjane Satrapi is

70. “Understanding Comics” is written by

71. Which Shakespearean play was Rabindranath Tagore forced to translate at the age of fourteen as a part of his holiday homework?

(D) The Merchant of Venice

72. The concept of “Social Drama” was developed by

73. The following play has experimented with cultural and dramatic possibilities in an historical light:

(B) Bringing Up Father

74. Which of these is not one of the general categories Raymond Williams delineates in his definition of culture?

75. ‘Native Earth Performing Arts’ is a theatre company based in