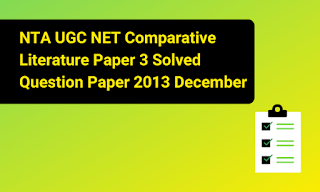 You can boost your preparation by referring to NTA UGC NET Comparative Literature Paper 3 Question Paper 2013 December. It will give you information about the important chapters and concepts covered in all chapters.

1. The reception of Romanticism in Hindi poetry has been studied by ____.

3. Charlotte Bronte’s Jane Eyre has been re-visioned in

(B) After Leaving Mrs. Mackenzie

4. A colonial era detective fiction writer whose reception and translation was widespread in India was _______.

5. Who among the following has coined the term “thick translation” to designate a model of a culturally informed and context-dependent practice of translation?

(D) The God of Small Things

(A) Launches a virulent attack on ancient Indian dramaturgy.

(B) Makes a fresh study of the rules and processes of ancient Indian dramaturgy.

8. While comparing Valmiki’s epic with Kamba’s Ramayanam, critics have commented, as the most striking difference between the two works, on the following aspect _______.

(A) Valmiki’s massive and rambling structure versus Kamban’s tight, chiselled out, tripartite structure.

(D) Valmiki’s stress on Kingship duties of Rama as against Kamban’s emphasis on Rama’s compassion.

10. Whose play has been translated into English as Encounter in Umbugland?

11. Who among the following writers was not a part of the Progressive Movement in Indian Literature?

12. Which of the following literary texts is about the transformative power of music in the middle of a political siege?

(B) Vikram Seth, An Equal Music

13. Which of the following features cannot be applied to most of the Bhakti writers and movements?

(A) They problematised the institution of priesthood by directly addressing God.

(B) They privileged the written tradition against the oral.

(C) They gave up Sanskrit and chose to compose in regional languages and dialects.

(D) Many of them travelled widely and were multi-lingual.

17. Who among the following has been associated with the “Veronica theme”?

18. A sociology of translation may include two of the following. Identify the correct combination from the following options:

III.       Expressive propensities of the text

The correct combination according to the codes is:

19. The only reference to ‘thematology’ in Theory of Literature is in the chapter entitled ________.

(A) “Literature and Society”

(B) “Literature and Ideas”

(D) “Literature and Other Arts”

20. Which Tamil poet, among the following, wrote a long poem focusing on the episode of the disrobing of Draupathi in the Mahabharata?

21. Which of the following novels by E.M. Forster uses Beethoven’s Fifth Symphony?

(B) Where Angels Fear to Tread

22. The Soviet terror of the 1930s does not serve as the context of which of the following works?

(B) Arthur Koestler’s Darkness at Noon

(D) Evgenia Ginzburg’s Into the Whirlwind

23. Which of the following novels has a painter as a character?

(A) To The Lighthouse

(B) A Farewell To Arms

(C) A Portrait of the Artist as a Young Man

(D) The Grapes of Wrath

24. In his influential theory of romanticism, René Wellek failed to accommodate _______.

(A) Both Linear and teleological

(B) Neither linear nor teleological

(C) Linear but not teleological

(D) Not linear but teleological

27. In his important essay “What is Enlightenment?” Immanuel Kant defined Enlightenment not only as a philosophical concept but ________.

(A) as a metaphysical enigma

(B) as a particular moment in history

(C) as a spiritual credo

(D) as a birth of new knowledge

28. If the theme is “a specific expression of a motif” (Trousson), then what motif is utilised when the situation is identified as jealousy and theme as Othello?

(A) Two men and one woman triangle

(B) Damsel in Distress

(C) The beauty and the beast

29. Who among the following initiated the concept of “imagined communities”?

30. Texts are shaped not by an imminent time, but by the play of divergent temporalities. Such a statement fits in with ________.

(A) The Formalist position

(B) The Structuralist position

35. Which story with a widow theme was turned into a film?

(C) Gone with the Wind

36. Aristotle excludes Aeschylus from his analysis of great tragedy writers because _______.

(A) He believed tragedy had not found its natural level with Aeschylus.

(B) He personally disliked Aeschylus.

(C) Aeschylus did not obey the rule of unity of space and time.

(D) Aeschylus was incapable of evoking eleos and phobos.

(D) distinguish between the trivial and the worthwhile

38. The founding fathers of British culture studies are

The correct combination according to the code is

39. Which noted twentieth century scholar among the following does Ronald Inden criticise for a romantic-orientalist view of Indian Literature?

41. The scholar who argues that Marxist literary historiography need not depend on a mechanical base-superstructure model is _______.

42. Who among the following describes kinship systems “as like a language”?

43. In Tolkappiam, the concept of iraicchi is described by commentators as a technique that _____.

(A) creates a sense of recognition in readers, which leads them to the inner meaning.

(B) causes the reader to perceive something that is different from what the words of the poem describe.

(C) points to a particular object while, in reality, aiming at a different object.

(D) provokes laughter in the reader, but in actuality, indicates something serious.

44. Which of the following space will not be subsumed under Foucault’s concept of heterotopia?

46. Tolkien’s Lord of the Rings has been viewed as a typical example of the genre of fantasy. Which modern fantasy writers break away from the medievalist influence of his “Horizon of Expectation”?

The right combination according to the code is

47. The name of Bakhtin is associated with which of the terms below?

The right answer according to the code is

(A) I is the correct answer.

(B) II is the correct answer.

(C) I and II is the correct answer.

(D) None of them is the correct answer.

48. Which of the following texts does not contribute towards an inventory of methodological assumptions of a cultural studies text?

(A) Hoggart’s The Uses of Literacy

(B) Williams’ Culture and Society

49. Writing literary history by moving away from the author to the way the work is received at different moments is the method developed by _______.

51. Literary history offers examples of transformation of generes. The ancient satyr play is re-classified as the modern satire. This is effected through a process of _______.

52. In which stage of the prehistory of Comparative Literature did the gradual emergence of the idea of world literature gain acceptance?

54. The first Chinese translations of poems from the Gitanjali were by ______.

55. “The ultimate issue for cultural studies is not what information is presented but whose information it is.” This assertion about culture studies was made by _______.

(B) Maithili and Bhojpuri

57. The latest International Comparative Literature Association Conference (2013) had as its theme ______.

(B) Comparative Literature and Culture Studies

59. In Valmiki Rāmāyāna, Rāma appears as a warrior-hero. He appears as an incarnation of God in _______.

(A) Ramcharitmanas by Tulsidas.

62. The narration of the story ‘Kholstomer’ through the perspective of the horse is cited as an example of what by Viktor Shklovsky?

(A) Transformation of the Horizon of Expectation.

(B) The creation of a proletarian hero.

(D) The use of defamiliarization.

63. Who among the following has proposed a radical ‘decentring of the subject’?

64. Identify the author of the statement –

“It is impossible to draw a line between Comparative Literature and general literature, between say, the influence of Walter Scott in France and the rise of the historical novel. Besides, the term ‘general literature’ lends itself to confusion; it has been understood to mean literary theory, poetics, the principles of literature.”

65. The Frankfurt school scholars were keen to revitalize or re-claim which ‘tradition’?

66. Who among the following discussed a “wave motion” model of literary influence wherein texts travel “across wide stretches of space and time”?

“Increasingly now, comparative studies of literature across languages have become the concern of Translation Studies, it is the translation tail now that wags the comparative dog.” Identify the commentator.

70. In the 1990s the Sahitya Akademi planned a multi volume History of Indian Literature projected to contain ________.

71. The concept of “distance reading” has been proposed by

72. Identify the Tamil short story writer whose story “Sapa Vimochanam” is cited as a remarkable example of the rendition of the Ahalya episode from the “Balakanda” of the Ramayana, as part of the focus on the subalterns in modern Tamil fiction.

73. Who among the following was not one of the contributors to the book Aspects of Comparative Literature: Current Approaches edited by Chandra Mohan and published in 1989?

75. Who among the following uses the metaphor – a monument in the making – about world literature?