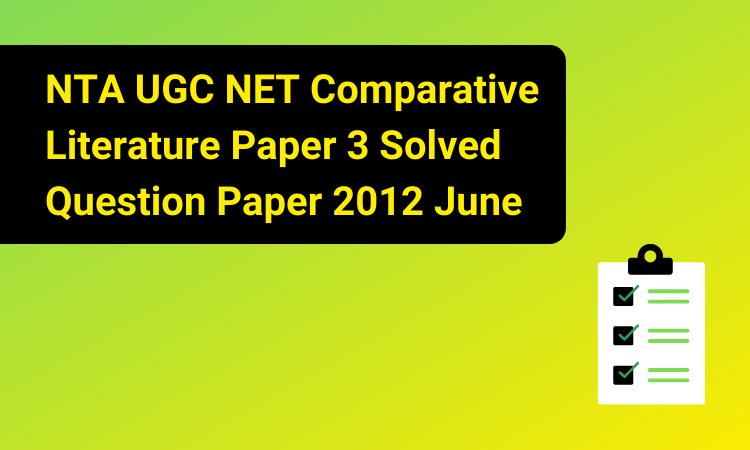 You can boost your preparation by referring to NTA UGC NET Comparative Literature Paper 3 Question Paper 2012 June. It will give you information about the important chapters and concepts covered in all chapters.

1. In France, the term ‘Comparative Literature’ came into use in the early 19th century in emulation of _____.

2. Utnapishtim is a character in

(A) The Book of Dead

3. The aesthetician who assigns to ‘dhvani’ a supreme position in poetry and at the same time emphasizes the significance of ‘Vakrokti’ is ________.

5. Who, according to Weisstein, was a great influence on Pushkin?

6. Who has attempted to show Saul Bellow’s awareness of Weltliteratur and to relate his work to European and American traditions?

7. The book, Landmarks in French Literature written by Lytton Strachey, sets to compare _______.

(A) Shakespeare and Rimbaud

(B) Shakespeare and Mallarme

8. The Colour Purple is a literary text by

9. Who among the following composed an exhaustive text on Indian dramaturgy?

11. Chandrashekar Kambar who was honoured this year with the Jnanpeeth Award belongs to the State of ______.

13. In his highly influential essay, “The Work of Art in an Age of Mechanical Reproduction”, Walter Benjamin puts forward his theory of _______.

16. According to Ananda K. Coomarasamy the whole of Indian aesthetics hinges on ______.

20. “In thematological studies, the poetic creation is no longer viewed as an independent, self-contained work of art but is seen only in terms of its component parts.” Who says this?

21. Who calls the Hundred Years War a ‘motif’ but the Joan of Arc, Stoff, and a theme?

25. In ‘Free Translation’ or ‘paraphrasing’

(A) matter is more important than the language.

(B) language is more important than the matter.

(C) rhythm is the most important factor.

26. The first Greek New Testament was published by

(A) Virgil’s The Aeneid

(B) Dante’s The Divine Comedy

29. According to Rene Wellek, ‘Universal Literature’ is the terms that compete with the meaning of _______.

30. The tradition of the picaresque novel in Europe was born during the

31. Hermeneutics is the study of

32. Phenomenology is a philosophy associated with

33. Which of the following texts does not contain a flood episode?

(B) The Golden Ass (Apuleius)

(A) A song of lamentation

(D) A song of longing

36. Which work of Thomas Mann is based on an Indian source?

(A) The Magic Mountain

(B) The Holy Sinner

37. Which among the following epics contains the most number of lines?

(A) An epistolary novel

(B) A historical novel

41. Ratnavali is an example of

42. The notion of ‘closet drama’ was initiated by

43. The Varkari poets were so called because

(A) They were Vaisnavas.

(B) They undertook an annual pilgrimage.

44. Tulsidas wrote the Ramacaritamanas in

45. ‘Bezbaroar Kal’ is considered a distinct literary period in the history of

46. Indian literary history, according to which scholar, can be seen in terms of periodic and at the same time recurring cycles?

47. The idea of the Nirguna Brahma and the Saguna Brahma is asserted in

(A) The Valmiki Ramayana

48. The romantic renaissance in Kerala, said to be the result of Kerala’s contact with the West, also started with the translation of the Sanskrit text ______.

50. Identify the set that has the correct chronological order:

52. “Sanskrit has a wonderful structure more perfect than Greek, more copious than the Latin …” Identify the author of this statement.

53. Name the comparatist who says that the two-way relationship of ‘emitter’ and ‘receiver’ is essential to any understanding of literary fortunes.

(A) The first volume of Marcel Proust’s Remembrance of Things Past is entitled Swann’s Way.

(B) Marcel Proust wrote a novel in many volumes entitled Swann’s Way.

(C) Marcel Proust imitated James Joyce when he wrote in the stream of consciousness manner.

55. Identify the true statement from the following:

(A) Neo-classicism originated in Germany.

(B) The Neo-classical “movement” in literature had its origins in France and from there it spread to countries like England and Germany.

(C) Neo-classicism was confined to France.

56. The Renaissance and particularly the baroque style, according to Wellek and Warren, flooded the whole of Eastern Europe, but hardly touched _______.

58. “The early practitioners of Comparative Literature were folklorists… who studied the origins of literature, its diversification in oral literary forms and its emergence into the early epic, drama and lyric.” Who says this?

(B) Remak and Weisstein

59. “The literary historian must be a critic even in order to be an historian.” Identify the author of the statement.

61. The prominent scientific work of the 19th century that profoundly influenced contemporary literature was _______.

(A) The Origin of Species

(D) Civilization and its Discontents

62. Which of the following is not a North American author?

63. Which member of the Harlem Renaissance authored the book, Shakespeare in Harlem?

64. Mäori writers have played an important role in the cultural renaissance in _______.

65. Identify the popular performing art form which is not from India.

66. August Strindberg’s play The Ghost Sonata is modelled on a piece by _____.

67. Utilitarianism was castigated in the following novel:

(D) Far from the Madding Crowd

(A) Trousson, Goethe and Tieghem

(B) Trousson, Frenzel and Levin

71. Identify the author of the statement: “Themes, like symbols… are polysemous: that is, they can be endowed with different meanings in the face of differing situations. This is what makes an enquiry into their permutations an adventure into the history of ideas.”

72. The only references in the Theory of Literature to thematology are found in the chapter entitled _______.

73. Identify the comedy from the following plays: