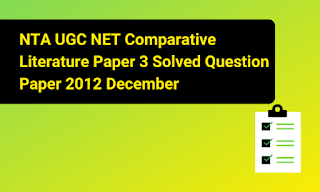 You can boost your preparation by referring to NTA UGC NET Comparative Literature Paper 3 Question Paper 2012 December. It will give you information about the important chapters and concepts covered in all chapters.

(A) Study of Poetry

(C) On the Modern Element in Literature

2. The devotional poets known as ‘Alwars’ and ‘Nayanmars’ emerged in

3. Canadian Indigenous people of mixed ancestry are known as _______.

4. George Bernard Shaw’s Man and Superman makes use of the Don Juan version of _______.

5. Who, according to Wellek, is the first formal historian of English poetry?

6. “A time-section dominated by a system of literary norms, standards and connections…” is

7. Which Jataka story was translated into Chinese and became the source of the Rama legend in China?

9. The great works such as the Odyssey, Aeneid, The Divine Comedy and Faust belong to the category of ________.

10. Comparative Literature attempts to achieve through comparative Studies “a more balanced view, a truer= perspective than is possible from the isolated analysis of a single national literature”. Identify the author of the statement

11. Identify the prose writer who was not a historian.

12. Match the items in List – I with those in List – II and choose the right code from the codes given below:

13. Who has called genre an “institution”?

14. A historical situation in which essential difference between two genres of literature is obscured by the presence of terms that are similarly spelt and pronounced is known as ______.

16. Who says, “Motifs are the phenomena of human spirit which have repeated themselves endlessly through centuries”?

17. Who suggests that it is impossible to transplant a genre which is firmly anchored in a specific historic geographical context?

18. Who is of the view that mythological and legendary themes are indices of humanity because heroes of myths and legends are in us and we are in them, and therefore they partake of our lives?

19. Who speaks of periodization as at oncenotional and ‘real’?

23. Identify the set that has the correct chronological order:

24. The Inheritance of Loss by Kiran Desai won the

(B) The Pulitzer Prize

26. Anandavardhana’s poetic theory as propounded in Dhvanyaloka has an affinity with the poetic credo of

28. The critic who expressed his disagreement with Ānandavardhana’s poetic theory is ______.

32. The European play that Utpal Dutt translated and staged to protest against the Emergency period in India was ______.

34. In the middle of the First World War, who felt the need to immerse in a culture born out of the various literatures of our world, each of them powerfully individualized?

37. The act of translation has been categorized into three types –in tralingual, in terlingual and intersemiotic, by ______.

38. Who said, “The art of translation is a subsidiary art and derivative”?

39. The concept of “Transformal Generative Grammar” was propagated by ______.

40. Giuseppe Verdi composed an opera based on the following tragedy of Shakespeare:

42. During the European Renaissance the visual arts did not flourish in________.

43. The following play includes dance and music on an extensive scale:

44. The Japanese ‘No Theatre’ includes the elements of

(B) Dance and music

45. Identify the author of the statement, “Alanguage is a dialect that has an army and a navy”.

46. F.R. Leavis staunchly disagreed with the view of the following scholar that “literature can be treated as a document in the history of ideas and philosophy”.

47. The following theorist did not belong to the school of Cultural Materialism or New Historicism:

48. Who wrote Freudianism and the Literary Mind?

49. The great fascination for myths in the20th century literature was influenced by ________.

(B) Northrop Frye’s Anatomy of Criticism

50. The first translation of the complete Bible into English was done by_______.

51. Where does Rene Wellek demonstrate that the word ‘literature’ has narrowed its meaning?

(A) Discriminations: Further Concept of Criticism

(B) Yearbook of Comparative and General Literature

53. Kalidasa’s Sakuntala was first translated into a Western language by_______.

54. Which of the following authors was a product of the Sturm und Drang movement?

(A) The product of the Renaissance

(B) The aftermath of the Reformation

(C) An evolution from the Classicalage

(D) The result of the Romantic Revival

57. Who formulated the theory of aninexorable step-by-step progression of the three major literary kinds, epic, lyric and drama, in Greek literary history?

58. Name the author of The German Novel

(A) Metaphase and paraphrase

(B) Fidelity and transparency

60. Who is of the view that genre studies involve two different directions, towards abstraction and differentiation?

61. This novel is not a powerful attack on the legal-judicial system ______

(A) Kafka’s The Trial

(D) Camus’ the Outsider (The Stranger)

62. The triadic structure of strophe antistrophe and epode, which incorporates dance movements into the structure of poetry, was initiated by ______.

(C) The paintings of Rembrandt

(D) The paintings of Titian

64. The concept of hegemony as a sophisticated tool for cultural analysis was developed by _______.

66. The first aesthetician to consider Svabhāvokti in Sanskrit poetics is _________.

68. A study of the fortunes of Greek heroes in plays from Sophocles to Sartre has been done by _______.

71. Identify the novelist who used the terms of ‘Chutnefiction’ and ‘pickling’ as metaphors in his/her text?

75. Defoe’s canonical text Robinson Crusoe has been rewritten as Foe by _______.