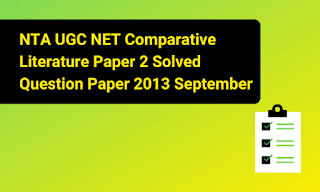 You can boost your preparation by referring to NTA UGC NET Comparative Literature Question Paper 2 2013 September. It will give you information about the important chapters and concepts covered in all chapters.

1. Andre Lefevere is the author of

(A) Translation, Rewriting and the Manipulation of Literary Fame

(B) The Translator’s Invisibility

(D) Toward a Science of Translating

3. Which among the following is not a Gothic novel?

(A) The Sorrows of Young Weather

(B) The Castle of Otranto

4. Death of a Discipline which addresses the need to usher in changes within the discipline of Comparative Literature, is written by

5. Writing literary history by moving away from the author to the way the work is received at different moments is the method developed by

6. Which God named below is not a God of War?

7. In describing Indian literary history, who is critical of the use of period?

(A) Sisir Kumar Das in A History of Indian Literature

(B) Suniti Kumar Chatterjee in Languages and Literatures of Modern India

(C) Ganesh Devy in Of Many Heroes: An Indian Essay in Literary Historiography

(A) The Politics of Translating from Gujarati into English

(C) The Linguistic Politics of India

(D) The Cultural Politics of English

(A) purging of excess emotions

(B) a lack of confidence on the part of the hero

(C) the poetic ability of the protagonist

(D) a tragic flaw or error in the protagonist

10. The following Malayalam film is an adaptation of Shakespeare’s Othello.

11. Strophe, anti-strophe and epode are parts of

12. The first German adaptation of the legend of ‘The Chalk Circle’ was done by

13. The Agony and the Ecstasy is a biography of

(A) Song of lamentation

15. Identify the person who wrote – “Just as this earth is not the sum of patches of land belonging to different people and to know the earth as such is sheer rusticity, so literature is not the mere total of works composed by different hands. Most of us, however, think of literature in what I have called the manner of the rustic.”

16. The Reluctant Fundamentalist is written by

18. In Indian poetics, the ‘Padya’ was divided as

19. Name the author of Jaisa ka Taisa, an adaptation of Moliere’s L’amowe medecin.

(A) play written by Moliere

(B) a novella written by Chetanbrind

(C) a play written by Chetanbrind

21. Thomas Mann in The Transposed Heads borrows his theme from

23. The traditional ‘box in box tale’ model was attempted in modern fiction as an alternative to the western novel by

I. a Chinese story

The correct combination according to the code is

(B) a Sumerian epic

(A) Pelops and Hippodemia + Cupid and Psyche

(B) Cupid and Psyche + Thyestes and Atreus

27. The international body of Comparatists is called

(A) International Association of Comparative Literature

29. The Vaishnava love lyrics were composed by

30. The concept of estrangement was used differently for literary analysis by

31. He Aranya He Mahanagar is

(B) a collection of Bangla poems by Rabindranath Tagore

(C) an anthology of ecocritical essays in Bangla by Rabindranath Tagore

(D) a collection of Oriya poems by Nilakantha Das

32. “On Linguistic Aspects of Translation” is written by

(A) a commentary of Natyashastra

(B) a biography of Abhinava Gupta

(C) a history of Kashmir

(D) an exposition of Mahabharata

34. According to “Natyashastra”, women characters will talk in

35. The Haun Saussy report deals with

(A) Problems of multiculturalism after the end of the Cold War

(C) State of the Discipline of Comparative Literature

36. The writer of the travelogue, Englondey Bangamahila first published in 1885 was

37. Identify the dominant ‘rasa’ of drama:

(A) Avadhi Commentary of Ramcharitmanas

(B) Hindi translation of Mahabharata

40. Colonization provides a backdrop of

(A) The Magic Mountain

41. The first literary adaptation of the German story of Faust was done by

(B) a book of legends

(C) a book of limerics

(D) a book of fables

43. “A translation has to be true to the translator no less than to the originals … Translation is choice, interpretation, an assertion of taste, a betrayal of what answers to one’s needs, one’s envies.” – Identify the author:

45. The American pioneer in the development of the theory and practice of Bible translation is

Read the following passage and answer the questions:

Traditionally, readers of literature, postulated an instantly responsive reader and strove to read like one. It is possible, however, to replace this postulate with the postulate of an initially unresponsive reader. Although it is strictly a postulate, it seems to correspond to observed reader behaviour at first meetings with a literary work. It is well known that the first reaction to unfamiliar music is one of puzzlement, apathy, or even dislike and that only continued exposure builds up a ‘taste’ or a capacity for response. This applies, in varying degrees, to music in general and then at lower levels of generalization, to a composer, a composition, a musician or singer, and an individual piece of music or a song. It similarly applies, again, varying degrees to literature, a genre, an author, a literary work and a particular passage.

46. The author is of the view that

(A) readers of literature are dumb

(B) readers of literature are believed to naturally respond to texts

(D) readers of literature respond without any prejudice

47. That readers naturally and instinctively respond to literature is a/an _______

48. On what basis does the author advance his postulate of “an initially unresponsive reader”?

(B) Observed behaviour of readers

49. What, according to the author, is conducive to better appreciation of art objects?

(B) Continued exposure to art objects

50. What does the expression “in varying degrees” refer to in this passage?