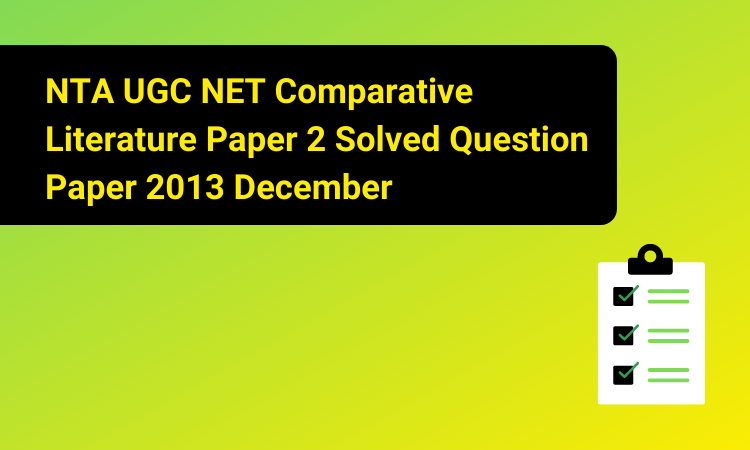 You can boost your preparation by referring to NTA UGC NET Comparative Literature Question Paper 2 2013 December. It will give you information about the important chapters and concepts covered in all chapters.

2. Which Marxist text among those listed below engages with formalism?

(A) Lenin and Philosophy by Althusser

(B) The Novel and the People by Fox.

(D) Literature and Revolution by Trotsky

3. The journal of the Comparative Literature Association of India is called ______.

(A) Literary and Cultural Studies

5. The periodical Indian Literature is currently edited by _______.

6. Which of the following words is not an acceptable translation of the term ‘rasa’?

8. In his An Autobiography: My Experiments with Truth, Gandhi mentions one of these texts as a distinct influence. Identify the text.

(B) Ruskin, Unto This Last

9. “Indian Literature is one though written in different languages.” This was a statement by ______

10. The theme of the educated hero as the liberator of the oppressed peasant appears diachronically in _______.

(A) Russian Nihilist and Marxist traditions.

(B) French tradition of the revolution of 1789 and the anti-Nazi resistance.

(C) Bengali leftist writings of the Progressive and Naxalite eras.

11. In an Akam poem, the description of a buffalo treading on a lotus as he feeds on small flowers symbolises an unfaithful man who makes his lady love suffer by visiting prostitutes, is an example of ________.

12. In which of these novels does M.K. Gandhi not feature by his physical presence?

(A) R.K. Narayan’s Waiting for the Mahatma

14. The utopian aspirations of the epic poets of the sixteenth century have been disentangled by examining the theme of earthly paradise by ________.

15. The Comparatist who introduces a distinction, between ‘direct’ and ‘indirect’ influence, by asking the question, ‘did a Renaissance poet have to read Petrarch in order to write a petrarchan sonnet’ is _______.

16. Which of the following pairs do not deal with thematology?

17. The critic who defined ‘analogy’ or ‘affinity’ as “resemblances in style, structure, mood or idea between works which have no other connection” is ________.

19. Who among the following has mapped the reception of Kalidasa’s Abhijñānasākuntalam in nineteenth century Europe?

(A) A short story by Rabindranath

(B) A play by Badal Sarkar

(C) A play by Girish Karnad

21. The critic who believes that a high translation activity takes place when a literature is in its initial stage of development is ________.

22. Which genre came up in medieval India as non-fiction but has survived to encompass fiction in modern South Asia?

24. Who talked about three kinds of poetry – the heroic (epic and tragedy), the scommatic (satire and comedy), and the pastoral?

25. The writer who makes a distinction between languages and meta language in connection with translation is ________.

27. Who argues that every translator should look at the translation process through the prism of culture, which refracts the source language cultural norms and it is the translator’s task to convey them, preserving their meaning and their foreigners, to the target-language text?

28. Who among the following conceived of Greek tragedy as an interplay of the Apollonian/Dionysian opposition ________?

29. Who among the following has translated Beowulf?

30. Marxist literary historiography in relation to science fiction was pioneered by ________.

(B) Richard the Third

33. One of the novels in the list below is analogically related to the structure of Indian classical music. Identify.

(A) The Ground Beneath Her Feet

(B) An Equal Music

34. The genre of history writing was developed in conscious opposition to epics by _________.

35. In which of the following American plays is the African folk music used as a motif?

(A) The Hairy Ape

(B) A Streetcar Named Desire

(D) Death of a Salesman

36. Which among the following elements tends to be de-emphasized in extrinsic histories of literature?

37. The Last Supper is a subject of which novel?

(A) The Bourne Inheritance

(B) The Da Vinci Code

38. Who among the following has said “all history is contemporary history”?

40. Which of the following is not one of the Comparative Literature “methodology triad”?

41. Which event was to result in the writing of a Canadian play?

(A) The Jallianwalla Bagh Massacre

(B) The Komagata Maru Incident

(D) The Fall of the Berlin Wall

42. Who among the following thinkers holds the view that the African culture is weak compared to the Western culture?

43. Which among the following is a definitive characteristic of the French School of Comparative Literature?

44. The critic who has used Robelais’ The Life of Gargantua and Pantagruel in a significant way is _______.

45. Who described Comparative Literature as “a discipline which bears on facts common to several literatures, considered as such, be it in their mutual interdependence or by analogy”?

48. Who are the authors of Dialectics of Enlightenment?

(A) Partha Chatterjee and Dipesh Chakravorty

(B) Edward Said and Homi Bhaba

50. Name the novel that features South Indian life that deals with the theme of extra-marital relationship as a sin from among the following:

(D) Nectar in a Sieve