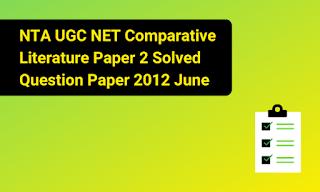 You can boost your preparation by referring to NTA UGC NET Comparative Literature Question Paper 2 2012 June. It will give you information about the important chapters and concepts covered in all chapters.

3. Who is of the view that a study of literary relationships is dangerous?

4. According to H.H. Remak, ‘World Literature’, when compared to Comparative Literature, suggests an element of _______.

(A) The French School of Comparatists

(B) The American School of Comparatists

6. An American version of the creed of British Romanticism is ______.

(B) “Because I could not stop for Death”

(C) The Leaves of Grass

(A) the sum total of more or less random data.

(B) a remembrance of things past.

(D) phenomena that have occurred at a specific time.

9. Which historian treated literary history ignoring the historical and mechanical order of succession of events, but focused on human experience?

10. Which of the following terms “stresses the beginning, rather than the duration, of a time span of considerable length”?

11. Who championed the theory of an inexorable step-by-step progression of the three major kinds, epic, lyric and drama, in Greek literary history?

12. One of the first writer to discuss the separation of the literary genre from other aspects of literature was _____.

(B) The University of Illinois

(C) Longinus’ On the Sublime

15. Who separated the choric poetry from monodic poetry?

16. Identify the work from among the following that does not have an Oedipal theme/motif:

(A) Desire under the Elms by O’Neill

(B) Hamlet by Shakespeare

(C) The White Devil by Webster

(D) The Infernal Machine by Cocteau

18. The study of the Electra theme from the Classical Age to the present is an instance of _______.

(A) a Diachronic study

(B) a Synchronic study

21. The Malayalam novel Chemmeen and the Tamil novel Amma Vandaal have been compared for their common theme of ______.

(A) Tradition and modernity

(C) Adultery and its consequences

23. Which of the following plays of Vijay Tendulkar has a historical setting?

(D) Silence ! The Court is in Session

24. Select the correct set from the following:

25. Identify the correct chronological sequence of the following Hindi authors:

26. According to Dryden, Horace’s Ars Poetica, translated by Ben Jonson, is an example of ______.

28. Identify the author of the following statement:

“A badly written book is only a blunder; but a bad translation of a good book is a crime.”

29. Who wrote the famous essay “On Translating Homer”?

30. Name the translator-critic who has elaborated on the seven different strategies on translation:

31. Who, among the following, focuses on language and text exclusively?

33. Identify the author of The English Moses:

38. Plutarch’s Biographies would constitute, in the area of influence studies, an instance of _____.

39. Who among the following thinkers exerted a tremendous impact on literature?

40. Who made the statement “one of the most complex problems in the study of literary influence is direct and indirect influence”?

41. The term ‘grotesque’ used to refer to a literary style/technique has its origins in ______.

42. One of the significant works on Literature and the Arts – Music and Literature – was written by

43. A comparative study of the minds of the criminal heroism Dostoievsky’s Crime and Punishment and Richard Wright’s Native Son involves the disciplines of ______.

(A) Literary Studies and Sociology

(B) Literary Studies and Psychology

44. Identify the literary text which can be illuminated by a study of Anthropology :

(A) The Waste Land

45. Which of the following texts is open for an analysis from the perspective of political theory?

(A) The Way of the World

46. The concept of ‘Wilderness Romance’ is employed in the study of American novels by the practitioners of _______.