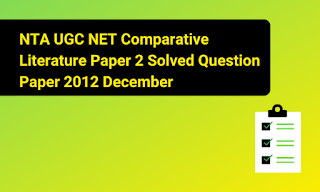 You can boost your preparation by referring to NTA UGC NET Comparative Literature Question Paper 2 2012 December. It will give you information about the important chapters and concepts covered in all chapters.

2. The methodology of analogical study was advocated by the

(A) French school of comparative literature

(B) Russian school of comparative literature

3. When we trace the development of the sonnet in Europe since Petrarch’s days, we are referring to

4. The most important criterion for deciding the nationality of a writer is

5. When one says, “A’ has influenced ‘B’ on the basis of similarities between the works of two authors,” we study

6. The cycle of American Literature is authorised by

7. A ‘counter-design’ is popularized by

8. Attempt at historical reconstruction has led to a great stress on the intention of the author. Identify the author of the statement:

9. In the study of literary History, Holinshed’s Chronicles would constitute

10. Who among the following was the first writer to stress the segregation of literary genres?

11. The principal topic of discussion in the third international congress of literary history held in Lyon in 1939 was

(A) Problem of literary types.

(B) Problem of literary translation.

(C) Literary relationship between the west and the east.

12. Who is of the view that generic classification is a waste of time?

13. Identify the author of the book Medieval Latin and the Rise of the European Love – lyric,

14. The ‘Orestes’ theme has been used by

16. Thanks to whose efforts did the 1920’s witness the emergence of the History of Ideas?

17. Wellek and Warren’s Theory of Literature does not contain a chapter on

(D) Literature and the other Arts.

18. Paul Hazard almost omits thematolo from comparative literature, as it does not involve

(A) Study of other Arts

19. The author of the essay “The Tradition of Traditions” is

20. The critic who argued that the “word ‘romantic’ has come to mean so many things that by itself, it means nothing.”

21. Who, by mistake, called the masters of Roman satire, comic playwrights?

23. The most important work of Dandin is

24. The most important exponent of oblique poetry in Sanskrit is

25. Akam and Puram are the unique features of

26. The idea of defamiliarization is associated with

(A) a beautiful narrative

(B) a long narrative

28. Who translated the ‘Rubaiyats’ of Omar Khayyam?

29. “What is world literature?” is written by

30. The origin of the legend of the Chalk Circle is

31. The Faust legend was adopted by

32. Hafiz became popular in Europe through the adaptations by

33. The comment “Poetry is that which is lost in translation” was made by

34. Medium to medium translation is not possible in the case of

36. Before the Christian era, the Hebrew Old Testament was translated in to

38. Vikram Seth’s novel A Suitable Boy has a structure which follows a pattern from

39. Which movement / trend were common to architecture and literature?

40. Identify the poet who was also a painter

41. “Impressionism” had its origins in

43. The dominant political theorist of the 17th century who inspired many literary figures was

44. Transcendentalism inspired the works of

45. Identify the author of The Historical Novel:

Note: Read the passage below and mark the correct answer:

The problem of writing the history of a period will be first a problem of description: we need to discern the decay of one convention and the rise of a new one. Why this change of convention has come about at a particular moment is a historical problem insoluble in general terms. One type of solution proposed assumes that within the literary development a stage of exhaustion is reached requiring the rise of a new code. The Russian formalists describe this process as a process of ‘automatization’, i.e. devices of poetic craft effective in their time become so common and hackneyed that new readers become inured against them and crave something different, something, it is assumed, antithetic to what has gone before. A see-saw alternation is the scheme of development, a series of revolts ever leading to new ‘actualizations’ of diction, themes, and all other devices. But this theory does not make clear why development has to move in the particular direction it has taken: mere see-saw schemes are obviously inadequate to describe the whole complexity of the process. One explanation of these changes in direction would put the burden on outside interferences and pressures of the social milieu:

(A) The problem of explanation and definition.

(B) The problem of discerning new conventions.

(C) The necessity to understand the degeneration of one convention and the emergence of an alternative.

(D) The need to understand the decay of the existing conventions.

47. The historical problem related to the change of convention is

(A) That a literary movement, wheneven a point of ennui is reached, calls for innovative practices.

(B) The rise of a new code due to change of convention.

(C) That the stage of exhaustion is reached in no time.

(D) The change of convention itself is a serious problem.

48. The word, ‘automatization’ means to the Russian Formalists

(B) The old get easily automatized.

(C) The poetic devices soon become so lustreless and uninteresting that the readers want something new.

49. ‘sea-saw’ alternation in the passage refers to:

(A) A combination of the devices of the present and the past.

(B) Prioritizing the past over the present.

(C) A scheme of developing the poetic craft of diction and theme.

(D) A number of protests that bring in innovations in the use of poetic materials and devices.

50. The change in convention is due to

(A) External interventions from the society.

(B) Internal pressures that poets suffer from,

(C) Insoluble problems due to decay of conventions.