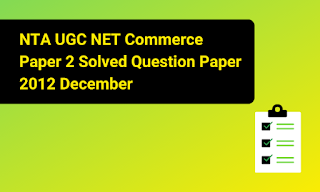 You can boost your preparation by referring to NTA UGC NET Commerce Question Paper 2 2012 December. It will give you information about the important chapters and concepts covered in all chapters.

1. GDP at factor cost is

2. Which one is not the main objective of fiscal policy of India?

(A) To increase liquidity in the economy.

(B) To promote price stability

(C) To minimize the inequalities of income and wealth

3. Which one is not an element of internal environment?

4. Out of the following, which four benefits are available to hosts countries from MNC’s?

i. Transfer of technology

5. Environmental degradation does not consist of

(A) Land degradation and soil erosion

(B) Problem of overgrazing and ecological degradation

6. Which one of the following concepts is used as fund in the preparation of Funds Flow Statement?

7. Window dressing is prohibited due to

(B) Convention of Disclosure

8. Assertion (A): Ratio analysis is one the tools employed to know the financial health of a concern.

Reason (R): Ratio analysis is not the only technique available to take investment decision.

9. Which of the following relate to measures of non-financial performance of a concern?

iii. Partners who have granted loans

iv. Partners who have contributed over and above profit sharing ratio

Arrange them in correct sequence in the event of the dissolution of a firm.

11. Which kind of economics explains the phenomenon of cause and effect relationship?

12. Assertion (A): Marginal cost and differential cost do not convey the same meaning in all the circumstances.

Reason (R): Differential cost increases or decreases due to change in fixed cost.

Arrange them in correct sequences:

14. A commodity is used for multiple purposes, and then the demand for it is known as

Which one of the following sequences is correct?

17. Which one of the following is not a measure of dispersion?

19. Struge’s rule is used to find out directly

(A) Number of classes in a continuous distribution

(B) Size of class limits

(C) Direction of the classification

20. Which of the following software has application in both Mathematics and Statistics?

a. The Practise of Management 1. Henry Fayol

b. Philosophy of Management 2. F.W. Taylor

22. Assertion (A): All decisions taken through mental process are rational.

23. Who among the following developed the technique of Management by Exception?

24. Which among the following are parts of job description?

25. Appointment of independent Directors is the part of Corporate Governance as per the

26. A method for achieving maximum market response from limited marketing resources by reorganising differences in the response characteristics of various parts of the market is known as

27. Who plays their significant role in distribution of goods when they do not sell to ultimate users or consumers?

28. In Marketing Mix, which four P’s are covered?

29. Which research includes all types of researches into human motives when it refers to qualitative research designed to uncover the consumer’s sub consciousness or hidden motivations?

30. False and misleading claims and vulgarity in advertisements do not match with

(B) Ethics in advertising

31. Arrange the following steps involved in capital budgeting in order of their occurrence:

32. Which method does not consider the time value of money?

(B) Internal Rate of Return

33. Which formula is used measure the degree of Operating leverage?

34. Which one is more appropriate for cost of retained earnings?

(A) Weighted Average Cost of Capital

(B) Opportunity cost to the firm

(C) Expected rate of return by the investor

35. Match the following with the most suitable options.

36. During which plan was the National Apprenticeship Training Scheme introduced?

a. An ordinary person does not want to work on his own 1. Hierarchy Theory

b. An individual is willing to work on his own 2. Hygiene Theory

38. Arrange the following staffing procedures in the correct sequences:

i. Determining sources of Personnel supply

39. Which among the following is not a voluntary method for prevention and settlement of disputes?

40. Statement-I: It is no better to pay employees for little than to pay too much.

(A) Statement I is true, but II is false.

(B) Statement II is true, but I is false.

(C) Both Statements I and II are true.

(D) Both Statements I and II are false.

42. Which one among the following has not started Commercial Banking?

43. What is OTP in credit card transactions?

44. The powers of Controller of Capital Issues of India is now shifted to

(A) Ministry of Finance

45. The success of E-banking depends upon:

46. International liquidity comprises which four of the following?

i. Gold held by Central Banks.

47. Which among the following are important bodies of WTO?

v. Council for Trade in Goods

An appropriate combination is

48. Which one is not the source of External Finance?

49. Which one is called Bretton-Wood Twins?

(A) United Nations Committee on Tariff and Development.

(B) United Nations Conference on Trade and Deficit.

(D) Union of Nations Cause for Trade and Development.